UN Photo/Manuel Elias
Miroslav Lajcák, President of the seventy-second session of the General Assembly, addresses journalists during an end-of-year press conference, and gives a preview of what is slated for 2018.
21 December 2017
SDGs

Safe migration, conflict prevention, sustainable development and United Nations reform will be the priorities of the 72nd UN General Assembly over the coming year, the 193-member body’s President, Miroslav Lajcak, said on Wednesday.

“We will continue our work on the Global Compact for safe, orderly and regular migration," Mr. Lajčák told a press conference at UN Headquarters, welcoming constructive debates and a positive atmosphere during the consultation and preparatory phases on the initiative.

“The next steps will be the intergovernmental negotiations, which will start in February with the aim of concluding them before July,” he explained, noting that he will hold parallel meetings on the pressing issue of safe migration with key actors from academia, non-governmental organizations and the private sector, aiming to take into account the views of society as a whole.

Meanwhile, Mr. Lajčák said that on 24 and 25 April 2018, he would convene a high-level meeting on peacebuilding. “This will be a good opportunity to focus on the UN's work on sustainable peace and conflict prevention,” he noted.

Keeping up the global momentum on the 2030 Agenda and its Sustainable Development Goals (SDGs), he said the Assembly would organize three events between March and June.

In May, the General Assembly would organize an event on youth focused on education, employment and the prevention of radicalism. “We do not want to make this event a routine meeting. We want this programme to be designed with young people,” said Mr. Lajčák, who said it is vital “not only talk to young people [but also] to listen to what [they] have to say about the work of the UN.”

In June, the Assembly President will hold a meeting on financing for development. “We need to address significant funding gaps when it comes to implementing the SDGs,” Mr. Lajčák stated: adding: “The truth is that with the current budget and pace, we will not be able to achieve the SDGs by 2030. So we need to strengthen the links between the SDGs and the financial resources that are available within the private sector.”

On other priorities, he said the UN reforms initiated by the Secretary-General will also be at the heart of the Assembly’s agenda in 2018. To that end, Mr. Lajčák announced that the Assembly had earlier on Wednesday adopted by consensus a resolution on overhauling the UN peace and security architecture. The text requests the Secretary-General to provide a second comprehensive report on this reform and on the development and management system of the Organization.

♦ Receive daily updates directly in your inbox - Subscribe here to a topic.
♦ Download the UN News app for your iOS or Android devices.
peacebuilding|migration 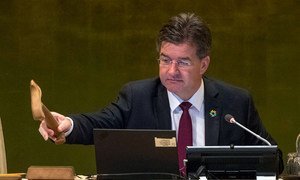 The United Nations General Assembly wrapped up its 72nd annual general debate today, with its President underscoring prevention of conflicts before they break out, support for UN peacekeeping, sustainable development, and respect for human rights and gender equality among the major priorities raised by the 196 Heads of State, Government and delegations.