As the United Nations tribunal dealing with atrocities committed during the Balkans conflicts in the 1990s prepares to close its doors on 31 December, top officials say the court has proven skeptics wrong, citing its achievements and its immense contribution to international criminal justice.

Established in 1993, the International Criminal Tribunal for the former Yugoslavia (ICTY) has spent more than 10,800 trial days, heard at least 4,650 witnesses, produced over 2.5 million pages of transcripts and indicted 161 individuals – all in its quest to end impunity for genocide, crimes against humanity and war crimes committed there.

“The ICTY has been the foundation for the existing international criminal justice regime. I believe it’s fair to say the ICTY can be considered the genesis of the global culture of accountability,” the Under-Secretary-General for Legal Affairs and UN Legal Counsel, Miguel de Serpa Soares, told a recent event held to reflect on the tribunal’s 24 years of operation.

Among other achievements, Radovan Karadzic and Ratko Mladic – two of the main architects of some of the worst atrocities in Bosnia and Herzegovina, including the genocide of Bosnian Muslims in Srebrenica – were convicted by the ICTY, with sentences of 40 years and life in prison, respectively.

“In 1993, I think, no one believed that we would have been able to bring justice to anyone […] We have proved exactly the opposite,” ICTY President Carmel Agius told UN News. He noted that the court has completed all judicial work, despite complex challenges, including the difficulty to bring witnesses from abroad, translation and interpretation issues, and a lack of cooperation from countries from which help was needed.

Through its trials, the Tribunal has heard 4,650 witnesses; established facts about numerous horrific crimes committed in the former Yugoslavia.

Given the atrocities being committed with absolute impunity in what was then Yugoslavia, UN Member States could not stand by and created the ICTY as “an emergency remedy,” said Mr. Agius, who was first elected to the tribunal as a judge in 2001 and has been serving as its President since November 2015.

In his view, an early success of the ICTY paved the way for the establishment of a permanent tribunal, namely the International Criminal Court (ICC).

“The international community, which believed in international justice and was watching us to see if we could make this experiment work, suddenly realized that the time was ripe to take one step further and that what could not be achieved over the previous 50 years could now become a possibility,” he said.

Mr. Agius said he was part of the negotiations for the establishment of the ICC that started around 1995. “By 1998, we had the [Rome] Statute,” he said, referring to the treaty that established the ICC as the central institution of the global criminal justice system.

Earlier this month, Mr. Agius addressed the Security Council, the body that created the ICTY, for the last time.

“Despite all the sceptics, the naysayers, the deniers who, from the very beginning, embarked on a campaign against the Tribunal and have been at pains to question our legitimacy and integrity and portray a doomsday scenario, I am proud to appear before this esteemed Council today and say: mission accomplished,” he declared.

The Chief Prosecutor of the ICTY, Serge Brammertz, told UN News that the closure of the court, which is based in The Hague, in the Netherlands, does not mean the end of impunity for the crimes committed in Bosnia and Herzegovina, Croatia, Serbia, and other places.

“We have indicted 161 individuals. It is a lot, compared with other international tribunals, but it’s very little if we look at the number of crimes which still need to be investigated and prosecuted,” he said, noting that in Sarajevo alone, there are more than 3,000 investigations ongoing.

“You can only have peace, long-term peace, if there is accountability for crimes committed during the conflict,” he added. 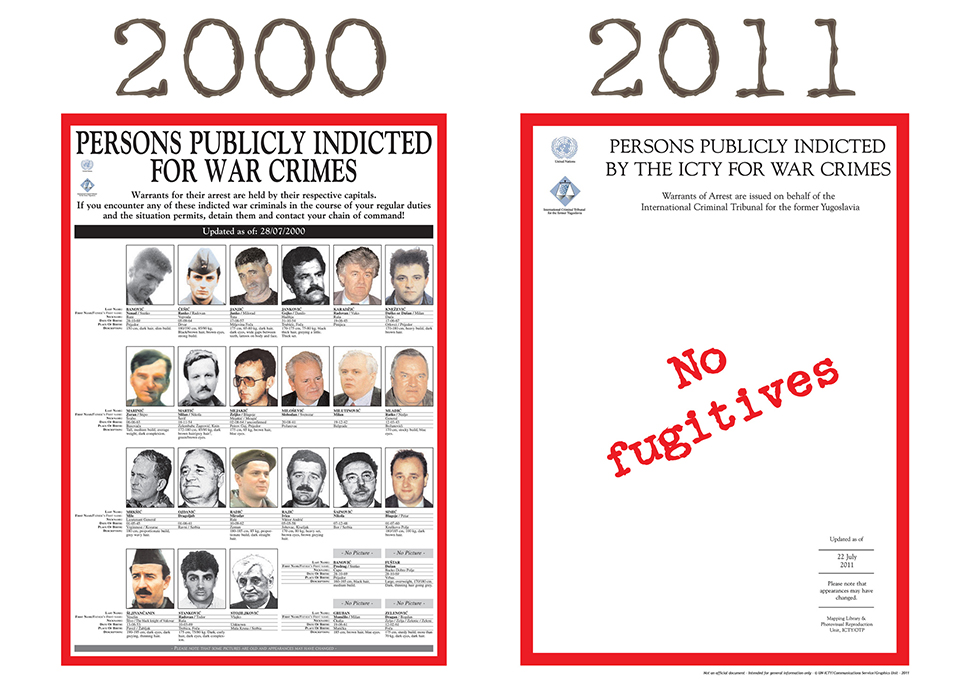 Final fugitive arrested - Goran Hadžic. On 20 July 2011 Goran Hadžic, former president of the self-proclaimed Serb republic within Croatia is arrested after living for seven years as a fugitive. With his arrest, all 161 individuals indicted by the Tribunal are accounted for. Photo: ICTY

Mr. Brammertz said the ICTY “exceeded expectations” and was “a success despite the legitimate criticism” that many victims’ associations have because of their higher expectations.

The most important moments for him over the past 10 years as Chief Prosecutor were his meetings with victims and survivors, who always reminded him why the tribunal was set up.

“But if I have to choose one specific moment, it was when I got the phone call: ‘General Mladic was arrested,’” he said.

Among the tribunal’s achievements, it held individuals to account regardless of their position. The ICTY indicted heads of state, prime ministers, army chiefs-of-staff, government ministers and many other leaders.

It has also provided thousands of victims the opportunity to be heard and to speak about their suffering. Many of them displayed exceptional courage in recalling their harrowing experiences. The tribunal preserves their testimonies in court transcripts and video recordings.

One of the witnesses who testified at the ICTY, Teufika Ibrahimefendic, a healthcare professional who had been involved in treating victims of war crimes, said that “the Hague Tribunal, [for] all the victims, all the women with whom I have had a chance to work, has a very great significance for them… They do trust that the real causes of what happened will be identified and that the people will muster enough courage, including victims, to tell the story of what happened… People expect that justice will be done and that the right decisions will be reached.”

The ICTY has also established crucial facts related to crimes committed in the former Yugoslavia, following careful review of testimonies of eyewitnesses, survivors and perpetrators, forensic data and documentary and video evidence. The tribunal’s judgements have contributed to creating a historical record, combatting denial and preventing attempts at revisionism and provided the basis for future transitional justice initiatives in the region.

In addition, the tribunal has encouraged judiciaries in the former Yugoslavia to reform and to continue its work of trying those responsible for war crimes committed there during the 1990s. It works in partnership with domestic courts in the region – transferring its evidence, knowledge and jurisprudence – as part of its continuing efforts to bring justice to victims in the former Yugoslavia.

♦ Receive daily updates directly in your inbox - Subscribe here to a topic.
♦ Download the UN News app for your iOS or Android devices.
Criminal Tribunal

After more than 24 years of operations, the United Nations tribunal set up to prosecute crimes committed during conflicts in the Balkans in the 1990s, has now completed all judicial work, the court’s President told the UN Security Council on Wednesday.