Aubrey Graham/IRIN
Women sit together outside a dormitory at the Heal Africa Transit Center for victims of sexual violence.
19 December 2017

The United Nations envoys dealing with sexual violence in conflict and the head of the Organization’s peacekeeping mission in the Democratic Republic of the Congo (DRC) have welcomed the conviction of 11 Congolese militia fighters for raping dozens of children – including an 18-month-old toddler – in the vast country’s restive east.

The Special Representatives of the UN Secretary-General, respectively on Sexual Violence in Conflict, Pramila Patten, and for Children and Armed Conflict, Virginia Gamba, jointly welcomed the decision by military justice authorities in the DRC on the conviction of a provincial parliamentarian and members of the ‘Army of Jesus’ militia for the crimes against humanity of rape for dozens of children between 2013 and 2016 in Kavumu, which is located in DRC’s South Kivu Province.

The South Kivu Military Court on Wednesday, 13 December, sentenced Frederic Batumike, a South Kivu provincial Member of Parliament, and 11 other persons to life in prison for the kidnapping and rapes of 38 children.

In addition to life sentences for crimes against humanity for rape and murder, the Court also awarded reparations to the victims.

“The child survivors of sexual violence in Kavumu, their families, and community have shown tremendous bravery throughout the trial process,”Special Representative Patten said this past Friday. “I commend their courage and I hope today’s judgment delivers a measure of justice for their suffering.”

She noted further that the “judgment and life sentences rendered by military justice authorities is a significant step forward in ending impunity for sexual violence in the DRC.”

The envoys also commended civil society actors for their role. “The case demonstrates that when there is political will, well-trained Government officials, civil society involvement, and an engaged press, there can be justice for sexual violence,” said Ms. Gamba.

Ms. Patten added that: “I am pleased that the UN Team of Experts on the Rule of Law and Sexual Violence in Conflict could be deployed to assist national authorities in the military justice system appropriately to ensure that the Kavumu case was prioritized in accordance with the Joint Communiqué signed by my Office with the Government of the DRC in 2013.”

“The potentially life-changing judgments of reparations that were awarded by the court to the child victims must be paid for justice to be fully delivered and the sentences of the perpetrators must be carried out,” they underscored.

For its part, the UN stabilization mission in the DRC, known by its French acronym, MONUSCO, on Saturday applauded the life sentences handed down by Congolese authorities and called the decision a “a major landmark in the fight against impunity for sexual violence in DRC.”

MONUSCO chief Maman Sidikou said the decision sends a clear signal that “no one is above the law, whatever the rank.”

The statement also noted that the UN provided logistics and security support which has enabled the Congolese judicial authorities to conduct the investigations and organize a fair trial in Kavumu.

Mr. Sidikou called the holding of the trial “the fruit of the collective and continued efforts made by the Personal Representative of the Congolese Head of State in charge of the fight against sexual violence and child recruitment, as well as by the various actors engaged in the fight against impunity.”

He urged Congolese authorities “to pursue their efforts to bring to justice all those who violate human rights, international humanitarian law and commit other serious crimes.”

Sexual exploitation of children on the rise in Mauritius, UN rights expert warns 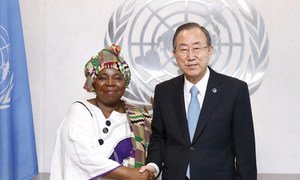 Secretary-General Ban Ki-moon and the Chairperson of the African Union Commission, Nkosazana Dlamini-Zuma, today discussed ways to further strengthen the relationship between the two organizations.