Shocked at the “incomprehensible” killing of a wheelchair-bound amputee protester by Israeli security forces, the top United Nations human rights official has called on the country to open an independent and impartial investigation into the incident.

“International human rights law strictly regulates the use of force in the context of protests and demonstrations. The lethal use of firearms should only be employed as the last resort, when strictly unavoidable, in order to protect life,” Zeid Ra’ad Al Hussein, the UN High Commissioner for Human Rights, said on Tuesday.

“However, as far as we can see, there is nothing whatsoever to suggest that Ibrahim Abu Thurayeh [the protester] was posing an imminent threat of death or serious injury when he was killed,” he added, stressing: “Given his severe disability, which must have been clearly visible to those who shot him, his killing is incomprehensible – a truly shocking and wanton act.”

According to the news release, Ibrahim Nayef Ibrahim Abu Thurayeh, a 29-year-old man from Gaza, who reportedly had both legs amputated after an Israeli attack on Gaza in 2008, was among hundreds of Palestinians marching across farmland towards a fence following Friday prayers on 15 December to protest against the United States’ decision to recognize Jerusalem as the capital of Israel.

He appears to have been killed by a bullet to the head when he was approximately 20 meters from the fence, it added.

Given his severe disability, which must have been clearly visible to those who shot him, his killing is incomprehensible – a truly shocking and wanton actHigh Commissioner Zeid

Since President Donald Trump’s 6 December statement concerning the status of Jerusalem, protests have been held throughout the occupied West Bank, including East Jerusalem, and in occupied Gaza. The response by the Israeli security forces has resulted in five people being killed, hundreds injured and large-scale arrests of Palestinians, noted OHCHR.

The biggest flashpoint has been in Gaza, where three people have been killed as protesters burned tires, threw stones, sang songs and waved flags along the fence. Israeli security forces have responded with firearms, including live-ammunition, to disperse the protesters.

According to the UN rights office, the use of live ammunition has resulted in over 220 people being injured in Gaza, including 95 on Friday alone, in addition to tens of others who sustained injuries from tear gas or rubber bullets, read the news release.

“Nevertheless, the High Commissioner called on Israel to immediately open an independent and impartial investigation into this incident, and into all others that have resulted in injury or death, with a view to holding the perpetrators accountable for any crimes committed,” it read.

Mr. Zeid also “unequivocally condemned” all attacks against civilians, including the indiscriminate shelling of Israeli civilian areas by armed Palestinian groups operating out of Gaza.

UN to host international media encounter on question of Palestine 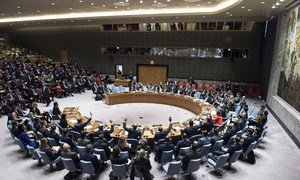