“While all concerned seek to avoid an accidental escalation leading to conflict, the risk is being multiplied by misplaced over-confidence, dangerous narratives and rhetoric, and the lack of communication channels,” the Secretary-General told the UN Security Council’s ministerial-level meeting, convened by Japan, on the challenges posed by the Democratic People’s Republic of Korea (DPRK) to international peace and security.

Describing the situation on the Korean Peninsula as “the most tense and dangerous peace and security issue in the world today,” he warned: “Any military action would have devastating and unpredictable consequences.”

In his briefing, Mr. Guterres said that unity of the Security Council is essential to achieve the goal of denuclearization in a peaceful manner and underscored that communication channels, including military-to-military ones have to be re-established and strengthened to reduce tensions in the region.

“The [UN] Secretariat and I are your partner in this effort. My good offices remain always available,” he added.

Mr. Guterres also noted the need to disassociate the peace and security situation in the DPRK from the humanitarian needs in the country.

Seventy per cent of the country’s population is affected by food insecurity and 40 per cent are malnourished and some $114 million is needed to meet urgent requirements.

However, the 2017 DPRK Humanitarian Needs and Priorities appeal is only 30 per cent funded.

Urging UN Member States, in particular those represented the Security Council, to consider the humanitarian imperatives, Mr. Guterres said: “The people of the DPRK need our generosity and help.”

Concluding his remarks, the Secretary-General pointed to the upcoming Winter Olympics in Pyeongchang and expressed hope that the DRPK would take part.

“As the General Assembly has recognized, these Games can foster an atmosphere of peace, development, tolerance and understanding on the Korean Peninsula and beyond. We need to spread and deepen that spirit of hope and possibility,” he said, urging for diplomatic engagement to sustainable peace and denuclearization.

“We must do everything we can to reach that objective – and avoid a level of danger that would be unpredictable in its trajectory and catastrophic in its consequences,” said Mr. Guterres.

The ministerial-level meeting was convened by Japan, in its capacity as the President of the 15-member Council for the month of December.

In addition to Taro Kono of the Minister of Foreign Affairs of Japan, which holds the Council presidency for the month, ministers from other Security Council member States, including Sweden (Margot Wallström), Ukraine (Pavlo Klimkin), the United Kingdom (Mark Field), and the United States (Rex Tillerson) were at the meeting. 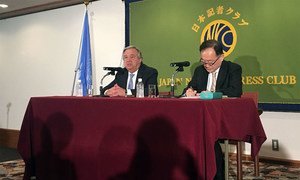 United Nations Secretary-General António Guterres wrapped up a short visit to Tokyo on Thursday with an appeal to the Democratic People’s Republic of Korea (DPRK) and other countries to implement relevant Security Council resolutions to denuclearize the Korean Peninsula.