UNICEF/UNI133530/Pietrasik
A health worker marks a boy’s finger with ink to show that he has been vaccinated against measles in India’s Gujarat State.
14 December 2017

Health is everyone's right and a driver of economic development, United Nations Secretary-General António Guterres stressed Thursday, expressing the UN's readiness to help countries move towards health coverage for all.

“Our goal must be to protect and promote physical and mental well-being for all. Health is both an outcome and a driver of progress,” Mr. Guterres told the global Universal Health Coverage Forum 2017, currently taking place in Tokyo, Japan.

“It is at the centre of our vision of a more sustainable, inclusive and prosperous future [...] When we invest in health – particularly of women and adolescents – we build more inclusive and resilient societies,” he added.

Next September marks the 40th anniversary of the Alma Ata Declaration, which famously set out a goal of achieving health for all.

Mr. Guterres said that targeted investments in recent decades led to major progress on a variety of health challenges.

“More women have access to modern contraception. Vaccination levels are up. More people living with HIV have access to anti-retrovirals. More people at risk of malaria are sleeping under an insecticide-treated nets. And an end to diseases such as polio is within sight,” he said.

However, gross inequities continue to leave the most vulnerable behind. For too many, health is inaccessible, unaffordable or altogether unavailable. Out-of-pocket spending on health causes an estimated 100 million people to fall below the poverty line every year.

Health not just the lack of illness. Our goal must be overall well-being, physically and mentally for everyone in all countries.UN Secretary-General Guterres

Furthermore, new threats, such as antimicrobial resistance, the impacts of climate change and the spread of non-communicable diseases, have emerged.

All of this will require more integrated health systems capable of responding effectively and equitably to the unique needs of their communities, he said.

Noting that every $1 spent on health yields up to $20 in full-income growth within a generation, Mr. Guterres stressed the critical importance of political commitment to unlocking these investments.

“There is of course no one-size-fits-all solution, and each country must walk its own path toward universal health coverage,” he said, pledging UN support in that regard.

“Just as peace is not simply the absence of conflict, so is health not just the lack of illness. Our goal is not only a band-aid or a single dose of medicine, important as those are. Our goal must be overall well-being, physically and mentally for everyone in all countries,” he concluded.

The Secretary-General will convene a General Assembly high-level meeting on universal health coverage in 2019. 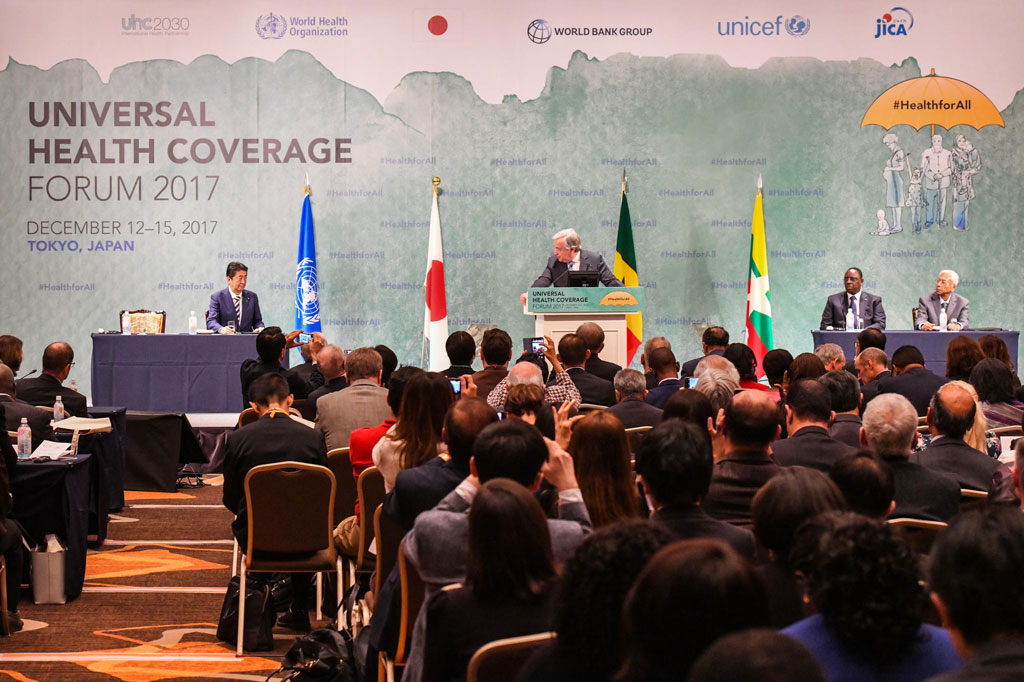 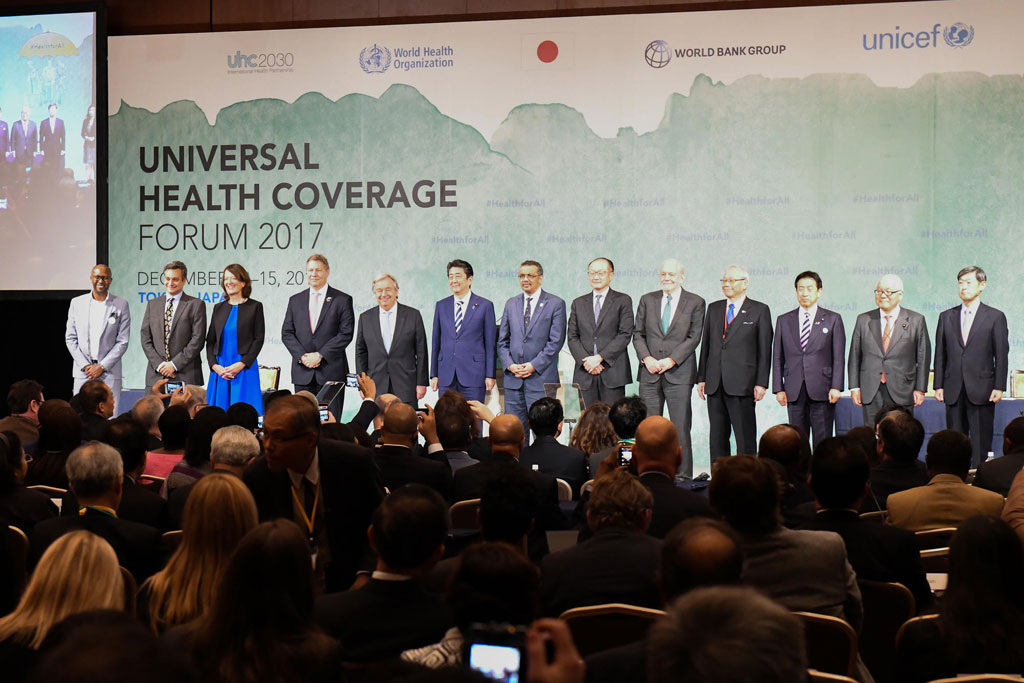 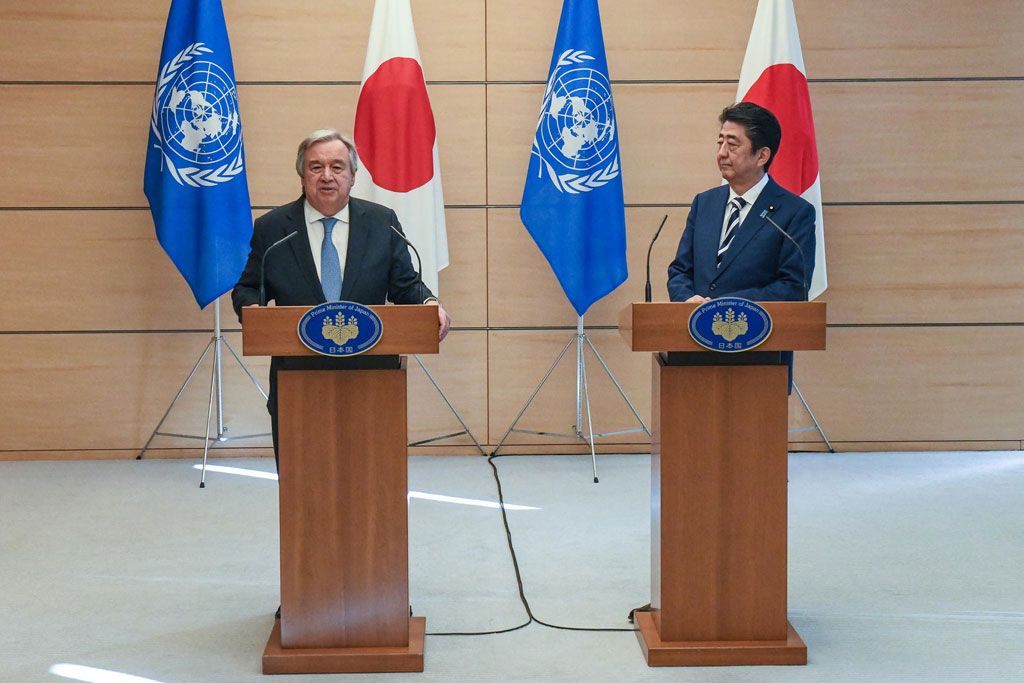 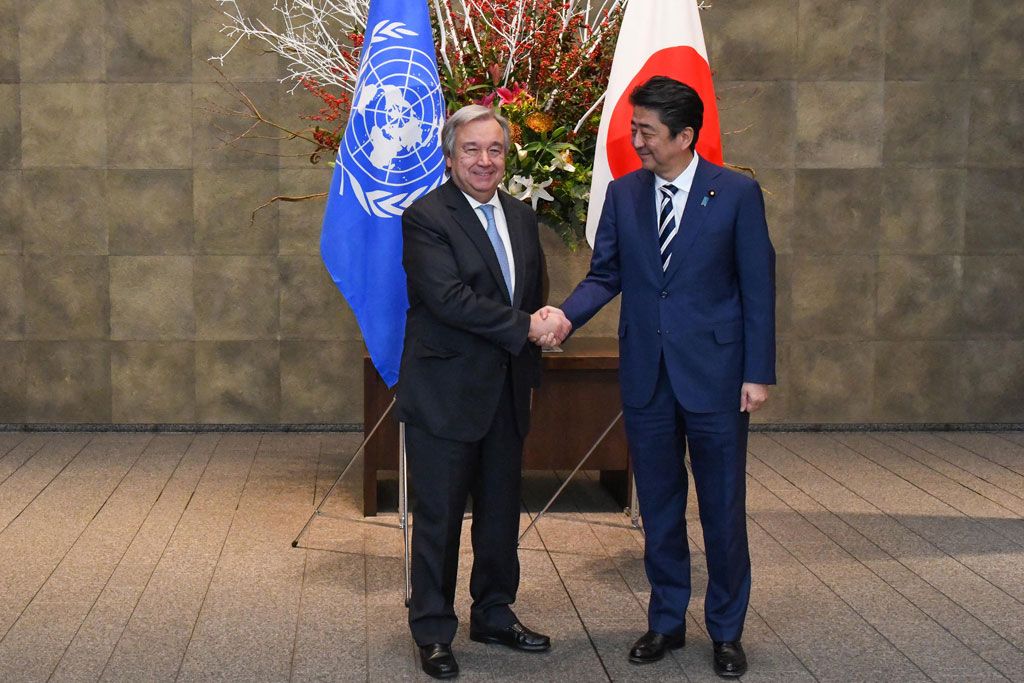 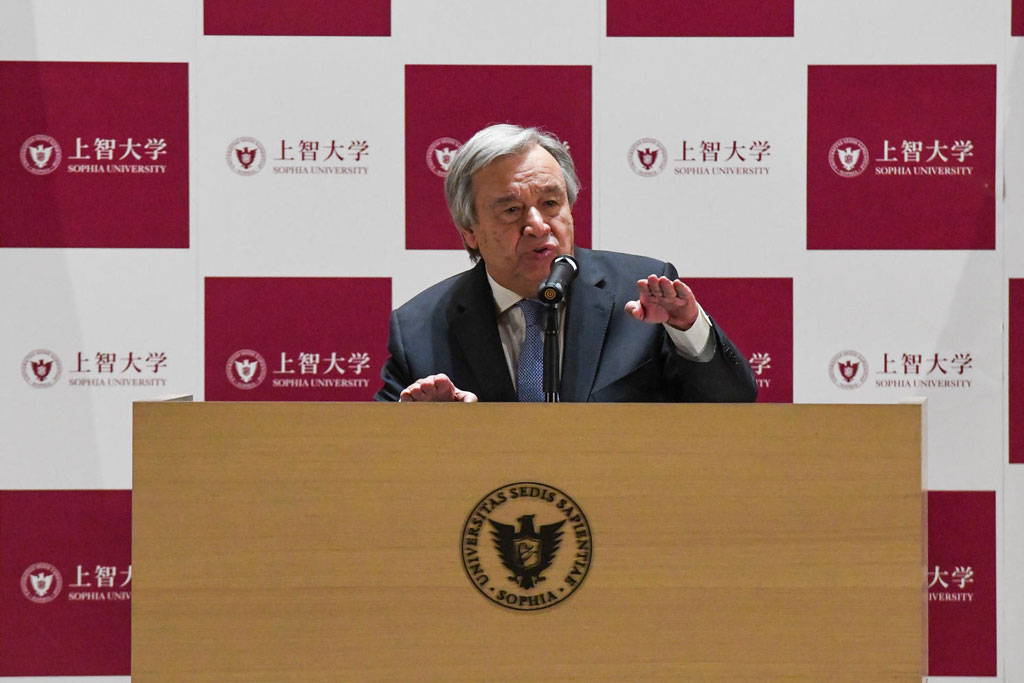 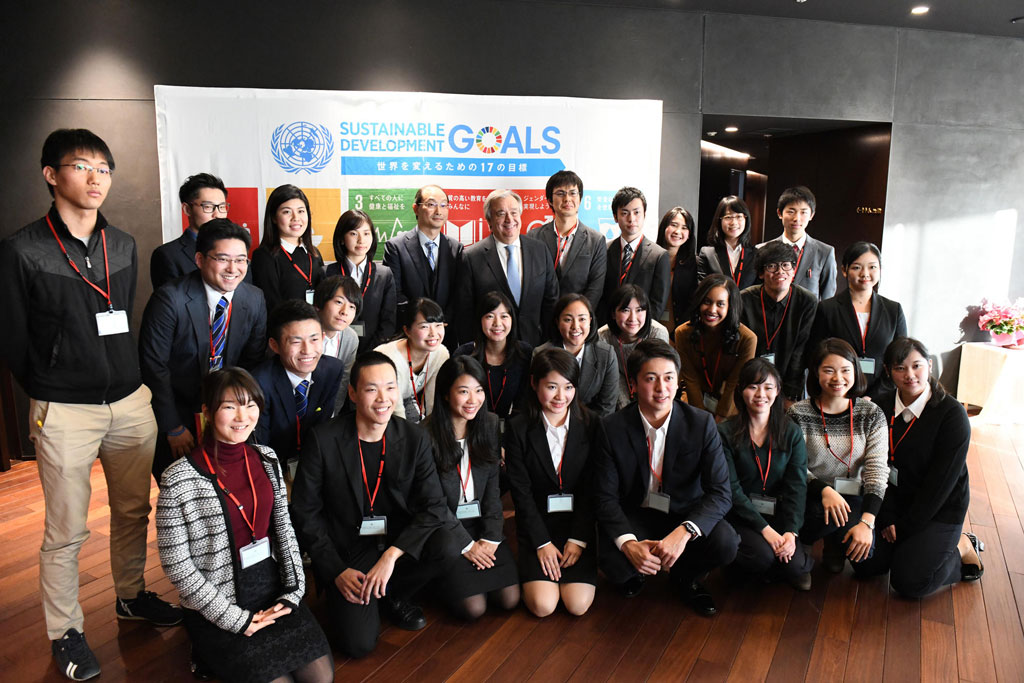 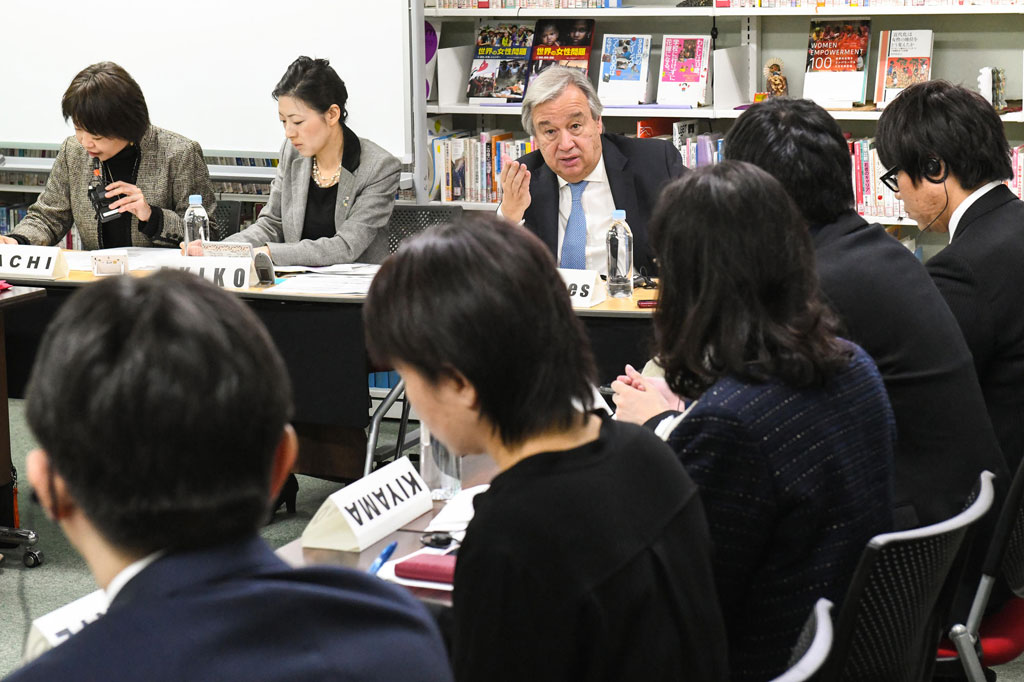 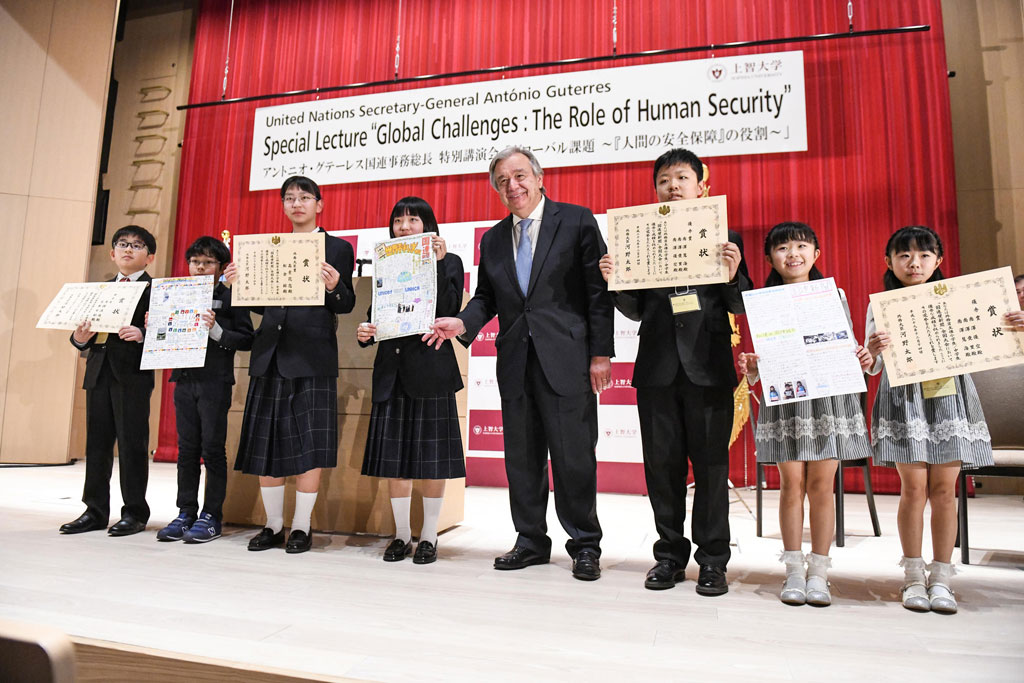 Later in the day, Mr. Guterres met with Prime Minister Abe. Speaking to the press afterwards, the Secretary-General said that Japan is a pillar of the international system and thanked the Government for its strong support to the UN in many fields.

Mr. Guterres also underscored Japan’s leadership in human security which, he said, reflects his own priority on prevention and sustainable development.

Regarding the situation on the Korean Peninsula, the Secretary-General underscored the need for the full implementation of Security Council resolutions by the Democratic People’s Republic of Korea and all other countries. He called for the unity of the 15-member body on the aim of denuclearizing the peninsula as well as the need to allow for the possibility of diplomatic engagement to peacefully achieve that objective.

“The worst possible thing for us to happen would be for us to sleepwalk into a war that might have very dramatic circumstances,” he said.

The solutions to these challenges, the Secretary-General said, have to compassionate, rational and based on enlightened self-interests, with a strong emphasis on prevention. He added, however, that the investments in prevention are unfortunately not enough.

He then met with about 40 students from Japanese universities linked with the UN’s Academic Impact programme.

Earlier in the morning, he met with Mr. Shinichi Kitaoka, President of the Japan International Cooperation Agency (JICA), thanking JICA’s close cooperation with the UN.

Mr. Guterres underscored his focus on prevention and sustaining peace, and expressed appreciation for Japan’s role in promoting the concept of human security to address the link between peace, development and humanitarian assistance.

At least half of the world's population cannot obtain essential health services, and nearly 100 million people are being pushed into extreme poverty each year due to the out-of-pocket health expenses they must pay, according to a United Nations-backed study.