WHO
Strong primary health care is the lifeblood of every health system and no country can achieve Universal Health Coverage without it.
13 December 2017
Health

At least half of the world's population cannot obtain essential health services, and nearly 100 million people are being pushed into extreme poverty each year due to the out-of-pocket health expenses they must pay, according to a United Nations-backed study.

“It is completely unacceptable that half the world still lacks coverage for the most essential health services,” said Tedros Adhanom Ghebreyesus, Director-General of the World Health Organization (WHO), in a press release.

“A solution exists: universal health coverage allows everyone to obtain the health services they need, when and where they need them, without facing financial hardship,” Mr. Tedros added.

The study, Tracking Universal Health Coverage: 2017 Global Monitoring Report, co-authored by the World Bank and WHO, notes that 800 million people spend at least 10 per cent of their household budgets on health expenses for themselves, a sick child or other family member.

“A solution exists: universal health coverage allows everyone to obtain the health services they need, when and where they need them, without facing financial hardship” – WHO Director-General

For almost 100 million people, these expenses are high enough to push them into extreme poverty, forcing them to survive on just $1.90 or less a day.

“The report makes clear that if we are serious – not just about better health outcomes, but also about ending poverty – we must urgently scale up our efforts on universal health coverage,” said World Bank Group President Jim Yong Kim.

Wide gaps exist in the availability of services in Sub-Saharan Africa and Southern Asia. In other regions, basic health care services such as family planning and infant immunization are becoming more available, but lack of financial protection makes it difficult for families to pay for these services.

Even in more affluent regions such as East Asia, Latin America and Europe, a growing number of people are spending at least 10 per cent of their household budgets on out-of-pocket health expenses.

Inequalities in health services are seen not just between, but also within countries: national averages can mask low levels of health service coverage in disadvantaged population groups.

The report is a key point of discussion at the global Universal Health Coverage Forum 2017, currently taking place in Tokyo, Japan. In addition to Mr. Kim and Mr. Tedros, attendees include heads of State and ministers from over 30 countries. UN Secretary-General Antonio Guterres will address the Forum on Thursday.

Ahead of global health assembly, WHO stresses need for solidarity, preparation 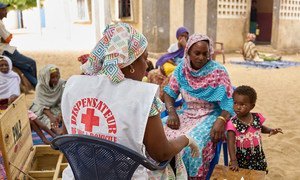 The United Nations on Tuesday called for greater efforts on the part of its Member States to ensure universal health coverage, and designated 12 December as International Universal Health Coverage Day.