UNICEF/Brown
UNICEF is on the ground in Bangladesh, immunizing Rohingya refugee children to fight the spread of disease, and delivering life-saving nutrition to the tens of thousands of children who are malnourished.

12 December 2017
A United Nations-backed campaign to immunize Rohingya children against diphtheria began on Tuesday in Bangladesh, following an outbreak that has resulted in nine deaths in the camps and makeshift settlements hosting these refugees from Myanmar.

“The outbreak shows a steep rise in cases, an indicator of the extreme vulnerability of children […] This calls for immediate action to protect them from this killer disease ,” said Edouard Beigbeder, the Representative of the UN Children's Fund (UNICEF) in Bangladesh.

The Government-led vaccination campaign will cover nearly 255,000 Rohingya children, and are supported by UNICEF, the World Health Organization (WHO) and GAVI, the Vaccine Alliance.

Recent data from WHO and Médecins Sans Frontières (MSF) shows 722 probable diphtheria cases, including nine deaths, in the camps and makeshift settlements, between 12 November and 10 December.

“We are moving quickly to control this diphtheria outbreak before it spins out of control. The vaccines will help protect every Rohingya child in these temporary settlements from falling prey to the deadly disease. Beyond vaccinations, we are helping health workers to clinically manage suspected cases, trace their contacts, and ensure sufficient supplies of medicines," said Navaratnasamy Paranietharan, WHO Representative to Bangladesh.

WHO is procuring 2 000 doses of diphtheria anti-toxins to treat diphtheria patients. Nearly 345 doses were hand carried by WHO from India's Delhi to Cox's Bazar in Bangladesh.

Diphtheria is an infectious respiratory disease caused by a potent toxin produced by certain strains of the bacterium Corynebacterium diphtheriae. It spreads through air droplets by coughing or sneezing. Risk factors include crowding, poor hygiene and lack of immunization.

According to the UN Office for the Coordination of Humanitarian Affairs (OCHA), there are nearly 860,000 Rohingya refugees in Cox's Bazar – of whom 646,000 have arrived since 25 August. Not only has the pace of new arrivals since 25 August made this the fastest growing refugee crisis in the world, the concentration of refugees in Cox's Bazar is now amongst the densest in the world.

Given the overcrowded, unsanitary living conditions, the refugee population is extremely vulnerable to disease outbreaks.

Decongesting the sites and settlements is an urgent priority, OCHA said.

In wake of post-election protests in Honduras, UN chief urges authorities to respect rule of law 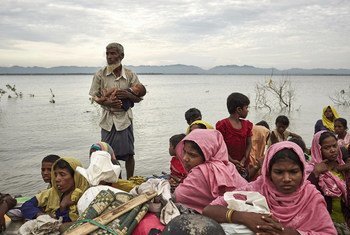 UN rights chief calls for probe into attacks against Rohingya, says genocide ‘cannot be ruled out’

5 December 2017
The United Nations human rights chief on Tuesday called for an international criminal probe into the perpetrators of the widespread and brutal attacks that have driven more than 600,000 Rohingya Muslims from Myanmar since August, noting that “elements of genocide” against the minority could not be ruled out.