An uptick in armed hostilities in Ukraine has resulted in more deaths and new damages to critical water infrastructure storing dangerous chemicals – posing a grave threat to human life and the environment, according to a new United Nations report.

The report of the Human Rights Monitoring Mission in Ukraine, published on Tuesday, warned that that daily ceasefire violations coupled with falling temperatures further aggravated a dire human rights and humanitarian situation on both sides of the contact line.

“The hostilities have never really stopped, affecting, in one way or another, the daily lives of millions in the conflict zone and in the country as whole, with the heaviest burden falling on those living in the immediate vicinity to the contact line,” stated Fiona Frazer, Head of the Monitoring Mission.

“As one civilian told my colleagues, ‘it is now worse than in 2014 because we can no longer bear it,’” she added.

From 16 August to 15 November, the mission recorded 15 conflict-related civilian deaths and 72 injuries – with 20 individual cases of killings, deprivation of liberty, enforced disappearances, torture and conflict-related sexual violence committed on both sides of the contact line, illustrating the prevailing atmosphere of impunity for grave violations in the conflict zone.

As the report cautioned about the situation of people who are detained incommunicado, the UN mission continued to be denied access to detainees – raising serious concerns on conditions and possible further human rights abuses, such as torture and ill-treatment.

The report detailed that in conflict-related cases, victims’ complaints of torture are often disregarded, and investigations into allegations are either rarely opened or ineffective. Behind closed doors, those detainees are ‘convicted’ without recourse to effective remedy.

This posed a grave concern, given that in November the ‘supreme court’ of the self-proclaimed ‘Donetsk people’s republic’ pronounced a second ‘death penalty.’

Also highlighted in the report was the broad interpretation and application of the criminal codes on terrorism, high treason and territorial integrity of the country.

Additionally, it flagged that protracted investigations and trials in many conflict-related cases resulted in prolonged detentions of the accused in pre-trial detention facilities, where the issue of access to medical care remained acute.

During each month of the reporting period, more than one million crossings over the contact line were recorded, with people claiming corruption and overly complicated checking procedures.

While the UN Human Rights Office does not have access to Crimea, it continued to analyze the situation there from its offices in mainland Ukraine.

The report concluded with advice in addressing acute systemic challenges, such as having Government policies evolve in an inclusive manner, and, together with judicial reforms, foster accountability and social cohesion.

In parallel, the implementation in full of the Minsk agreements by all parties to the conflict is critical for peace and reconciliation. 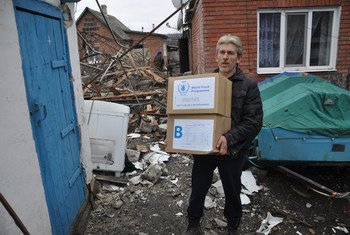 Ukraine: UN and partners seek $187 million amid humanitarian crisis that is ‘worse than it’s ever been’

7 December 2017
The humanitarian situation in war-torn eastern Ukraine is worse than ever, and people are at breaking point, the senior-most United Nations aid official in the country said on Thursday, as he launched a response plan.