UN Photo/Evan Schneider
A building damaged by the 11 December 2007 terrorist attack across the street from the UN Headquarters complex in Algiers. The bombing claimed the lives of 17 United Nations workers.
11 December 2017
Peace and Security

In a message commemorating the 2007 bombing of the United Nations offices in Algiers, the capital of Algeria, Secretary-General António Guterres expressed the Organization’s continuing support to combat terrorism and violent extremism.

"These terrorists hit Algeria, but they also hit the UN in the heart. It was the entire staff of the Organization who was touched, who felt this pain,” said the Secretary-General, in a message in French.

"Unfortunately, these attacks are only increasing and we are now targeted around the world, while we are here to support the most vulnerable populations,” he highlighted.

Seventeen staff members from several UN humanitarian and development agencies were killed on 11 December 2007 when a car bomb ripped through the offices. A number of Algerians were also killed and over one hundred injured.

Also in the message the Secretary-General expressed his full solidarity with the people and the Government of Algeria in their efforts to fight against terrorism and violent extremism.

“The United Nations will always be at your side,” he said. 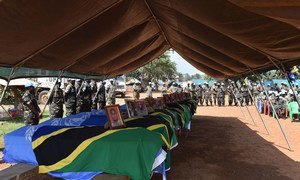 The United Nations mission in the Democratic Republic of the Congo (DRC) on Monday paid tribute to the Tanzanian peacekeepers killed on 7 December in the worst attack on UN 'blue helmets' in recent history.