11 December 2017
People’s rights are reportedly violated in “almost every aspect” of their lives in the Democratic People’s Republic of Korea (DPRK), the United Nations human rights chief warned Monday, stressing that security tensions on the Korean Peninsula should not negate concerns about the situation of ordinary people there.

“I regret that it is impossible for me to point to any significant improvement in the human rights situation […] Indeed, security tensions seem to have deepened the extremely serious human rights violations endured by the DPRK’s 25 million people,” UN High Commissioner for Human Rights Zeid Ra’ad Al Hussein told the Security Council via video link from Paris.

He said that while his Office (OHCHR) struggles to paint the complete picture of the situation due to the lack of access to the DPRK, “escapees have reported to us extremely widespread violations of rights in almost every aspect of people’s lives.”

Those violations include widespread torture in detention centres, where it is used to extract information or confessions from people suspected of such activities as planning to leave the country or communicating with the outside world. Detainees work in mines or infrastructure projects in conditions of severe deprivation.

Moreover, there is absolute secrecy about people detained in the five political prison camps which are also reportedly operational, Mr. Zeid said, noting that OHCHR’s interviews with persons who have left the DPRK indicate that fear of being sent to these facilities is a powerful instrument of control.

Repatriated escapees are routinely subjected to multiple forms of torture and ill-treatment at detention centres, including beatings, forced labour, deprivation of food and healthcare and sexual violence. Women are subjected to invasive body searches that may amount to rape under international law.

Mr. Zeid also said that no progress has been made regarding cases of international abductions and enforced disappearances of foreign nationals.

“The people of the DPRK also face severe violations of their economic, social and cultural rights,” Mr. Zeid said, noting that they face chronic food insecurity, and pervasive corruption that is forcing even very poor people to frequently pay hefty bribes to enable their children to pursue primary or higher education, to engage in private business, and access healthcare.

Mr. Zeid said sanctions imposed by the Security Council on the DPRK may be adversely affecting the humanitarian assistance provided by UN agencies and others, which is literally a lifeline for some 13 million acutely vulnerable individuals in the country, asking the 15-member body to conduct an assessment of the human rights impact of sanctions, and minimize their adverse humanitarian consequences.

Above all, every effort must be made to ensure the Government of the DPRK makes urgent changes to the country’s laws and policies, to enable greater freedom and access to fundamental services and goods.

OHCHR is strengthening monitoring efforts by recruiting criminal law experts and establishing a repository of cases to be used in future prosecutions.

While there is debate whether it is adequate for the Council to discuss human rights issues, today’s meeting was OHCHR’s fourth briefing to the Council on the DPRK in as many years.

Also briefing the Council was Assistant Secretary-General for Political Affairs Miroslav Jenca, who recalled that in response to the accelerated nuclear and ballistic missile testing by the DPRK, the Council has strengthened its DPRK sanctions regime with three additional resolutions since the last briefing.

Citing the possibility that sanctions may have a detrimental impact on livelihoods and medical care, he encouraged all international and non-governmental organizations who are facing operational challenges to use the established process to inform or seek the necessary guidance or exemption from the DPRK sanctions regime.

This will help to remove ambiguity and provide reassurance for the relevant entities and partners to facilitate the work of such organizations in the DPRK, he said, urging the sanction’s regime to continue to expeditiously review these requests.

Mr. Jenca also urged all Member States to support the lifesaving activities in the country, as some $114 million are required to address the critical humanitarian needs in the DPRK.

He also called on financial institutions to exercise their corporate social responsibility and provide the lifesaving banking services for humanitarian organizations in the country. The channel would be sent to the Security Council for approval. 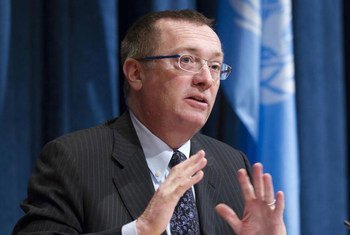 9 December 2017
In their meetings this week, the United Nations political chief and senior officials of the Democratic People's Republic of Korea (DPRK) shared the view that the Korean Peninsula faces the most tense and dangerous peace and security situation in the world.