The note said they “agreed that the current situation is the most tense and dangerous peace and security issue in the world today.”

During the visit, Mr. Feltman noted the urgent need to prevent miscalculations and open channels to reduce the risks of conflict, underlining that the international community is committed to the achievement of a peaceful solution to the situation on the Korean Peninsula.

Mr. Feltman also emphasized the need for the full implementation of all relevant Security Council resolutions, and stressed that there can only be a diplomatic solution to the situation, achieved through a process of sincere dialogue.

Mr. Feltman also met with the United Nations Country Team and members of the diplomatic corps, and visited UN project sites, including a children's foodstuff factory, TB prevention institute, breast tumour institute, and paediatric hospital. During the site visits, he learned about the UN's life-saving work on the ground as well as the challenges in procurement and funding gaps. 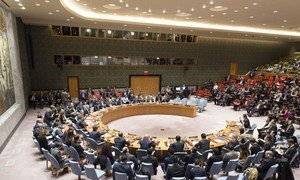 After DPRK missile launch, UN political chief urges Security Council to ‘do all it can’ to prevent escalation

Following the latest ballistic missile launch by the Democratic People’s Republic of Korea (DPRK), which its official media claimed is “capable of striking the whole mainland of the United States,” the top United Nations political affairs official on Wednesday urged Security Council members to unite in preventing an escalation.