The Force conjointe du G5 Sahel (FC-G5S) was established by the Burkina Faso, Chad, Mali, Mauritania and Niger – the Group of Five for the Sahel (G5 Sahel) – to jointly combat terrorism and transnational organized crime in the region.

In the resolution adopted today, the 15-member Security Council welcomed progress achieved in the operationalization of the FC-G5S and underlined the need for FC-G5S operations to be conducted in full compliance with international law, including international humanitarian, human rights and refugee laws, as applicable.

The Council further stressed the need to ensure that the gender perspective is taken into account in implementing all aspects of the strategic concept of FC-G5S operations, including by ensuring that gender analysis and women’s participation are integrated into assessments, planning and operations.

Also in the resolution, the Security Council requested the Secretary-General to take appropriate steps to conclude a technical agreement between the UN, the European Union (EU) and G5 Sahel States, to provide specified operational and logistical support through MINUSMA to the FC-G5S.

The support provided pursuant to the technical agreement should “be conducted at the discretion of the Special Representative of the Secretary-General for Mali and Head of MINUSMA, in close consultation with the Force Commander, and without affecting MINUSMA’s capacity to implement its mandate and strategic priorities, and be restricted to the areas of operations of MINUSMA where such support is compatible with its current level of capacities,” added the resolution.

Also in the resolution, the Council expressed its deep concern over the “persistent delays” in the full implementation of key provisions of the Agreement on Peace and Reconciliation in Mali and renewed its “urgent call” on the Government of Mali and the Plateforme and Coordination armed groups to take immediate and concrete action to fully and expeditiously deliver on their remaining obligations under the Agreement.

♦ Receive daily updates directly in your inbox - Subscribe here to a topic.
♦ Download the UN News app for your iOS or Android devices.
sahel|peacekeeping 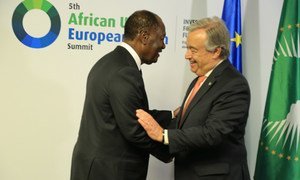 The importance of regional organizations grows with every decade that passes as they are essential to face the difficult challenges that threaten the world, United Nations Secretary-General António Guterres said Wednesday at the African Union-European Union Summit in Côte d'Ivoire.