Ukraine: UN and partners seek $187 million amid humanitarian crisis that is ‘worse than it’s ever been’

The humanitarian situation in war-torn eastern Ukraine is worse than ever, and people are at breaking point, the senior-most United Nations aid official in the country said on Thursday, as he launched a response plan.

“From my perspective, the humanitarian crisis in Ukraine is worse than it’s ever been since the onset of conflict in 2014,” said Neal Walker, UN Resident and Humanitarian Coordinator in Ukraine, in Geneva.

He urged UN Member States to support the country’s 2018 Humanitarian Response Plan (HRP ), which calls for $187 million to help 2.3 million people in the country’s east.

“Today, I call on the Member States to show their solidarity by supporting this important appeal,” said Mr. Walker, stressing that “lasting peace is the only humanitarian solution for millions of people affected.”

Amid a spike in needs and ongoing clashes in the east between government forces and separatists, Mr. Walker noted Ukraine as being among “the most forgotten” conflict.

Entering its fourth year, many of the affected people have exhausted their savings and ability to cope, and are now forced to choose between food, medicine, shelter or their children’s education. Millions risk daily shelling, intensive fighting and other hostilities.

At the same time, through only five operational checkpoints along a 457-kilometre ‘contact line,’ up to one million people cross every month to access basic services, social benefits and maintain family networks.

“The people of eastern Ukraine continue to pay the highest price for the conflict,” maintained Mr. Walker.

Of the 4.4 million affected people, some 3.4 million require humanitarian assistance and protection – 2.3 of whom are considered to be the most vulnerable, including the elderly, women and children.

“While Ukraine may no longer be front page news, millions of men, women and children urgently require our help,” he underscored.

The HRP outlines the key humanitarian relief and protection activities required by 32 international and 16 national organisations in 2018, including throughout the harsh winter months. 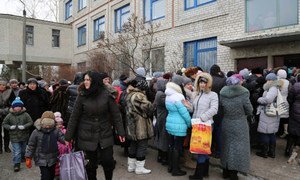 As temperatures plummet across eastern Ukraine, many – including the elderly – who fled their homes following hostilities are forced to return to their original place of residence due to lack of jobs and money to pay rent in the places they were sheltering, the United Nations migration agency has reported.