IOM/Muse Mohammed
A migrant family looks out the window and take pictures as they undertake their journey for resettling.
7 December 2017

Commitment and cooperation from the global community is critical to maximize the benefits of migration and to overcome its challenges, said a senior United Nations official at the conclusion of a stocktaking meeting on the Global Compact on international migration.

While there are challenges, including changing demographics, stresses in the environment, poverty and conflict, human mobility offers immense benefits, such as the promise of more sustainable development, more attuned to international labour market needs and improved working standards, highlighted Louise Arbour, the Special Representative of the UN Secretary-General for International Migration.

“We stand today tasked with the mandate to weave these challenges and opportunities into a global effort to enhance State cooperation in the management of migration,” she said Wednesday at the end of a three-day meeting in Puerto Vallarta, Mexico, that reviewed and analysed the data and recommendations gathered during the consultation phase.

In her remarks, Ms. Arbour reminded the meeting of the “tragedy of large mixed flows of people on the move and how to deal with those who are ineligible for international refugee protection yet for whom humanitarian assistance and longer-term solutions are no less urgent.”

She also expressed the determination of the UN system to support all Member States in the implementation of the Global Compact for Safe, Orderly and Regular Migration.

VIDEO:UN envoy Louise Arbour emphasizes the need for global cooperation to capitalize on the benefits of international migration.

The next step in this process towards the Global Compact is the Secretary-General's report on migration, expected to be released before mid-January 2018, followed by intergovernmental negotiations (expected to begin in February and conclude in July).

The Global Compact will be presented for adoption at an intergovernmental conference on international migration that will be held in Morocco at the end of 2018.

Also speaking at the closing of the meeting, Miroslav Lajčák, the President of the General Assembly, spoke of the results achieved so far and added that “tough negotiations” lay ahead.

The path forward, Mr. Lajčák suggested, is to focus on the “strong common positions,” the first of which is the acknowledgment that the current response to international migration is not sustainable and this is a global phenomenon that needs an international response.

“The UN is the best – and, in fact, the only – forum in which this response can be formulated,” Mr. Lajčák said, noting that this does not mean a diminution of State sovereignty, stating “Member States will determine their own migration policies.”

AUDIO: Director General William Lacey Swing speaks about what is at stake for the millions across the world fleeing their homes. 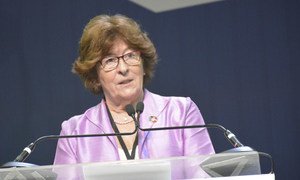 Noting that the movement of people across borders is a global reality, a senior United Nations official stressed that policy decisions governing migration must be based on fact and not on perception or myth.