UNHCR/Dominic Nahr
Sexual violence and torture of men and boys in Syria by multiple parties to the conflict appears to be far more widespread than previously thought.
6 December 2017

A study carried out by the United Nations refugee agency has revealed disturbing details about a little-known side to the Syrian conflict: sexual violence against boys and men.

The report, published Wednesday by the Office of the UN High Commissioner for Refugees (UNHCR), compiles interviews with dozens of victims in Iraq, Lebanon and Jordan.

Interviews with 73 humanitarian personnel from 34 agencies were conducted, as well as 21 focus group discussions with 196 refugees. According to UNHCR, those interviewed for the study provided shocking accounts of what they, or others known to them, had experienced.

Reported forms of sexual violence included rape and mutilation of or shooting of genitals at point-blank range. Much of this was reported as occurring in detention or makeshift prisons. UNHCR researchers heard accounts of violence against boys as young as 10, and against men including those in their 80s.

The findings and recommendations presented in the report, entitled We Keep it in Our Heart, offer a starting point for unpacking and addressing a complex, under-investigated issue.

Given the challenges in researching this taboo topic, sexual violence against men and boys is likely occurring under a variety of circumstances not identified in this exploratory study. Additional investigation and attention are imperative to clarify the scope of sexual violence against males, prevent this violence where possible, and effectively meet the needs of survivors.

Among the harrowing testimonies recounted is that of “Tarek,” detained during the war in his native Syria, and held in a darkened cell for a month with 80 other people. But those harsh conditions were the least of it.

Kept naked, he and other detainees were strung up by their hands at night, tortured with electric shocks to their genitals and gang raped by their captors, said UNHCR.

“They would come into the cell to violate us, but it was dark – we couldn’t see them. All we could hear were people saying, ‘Stop! Don’t! … I thought we would die,” Tarek recalled.

A further read of the study reveals that Tarek’s experience is far from unique.

“These are most disturbing accounts revealing just how grave the risk of sexual violence has become both for women and girls and, as shown by this recent report, also men and boys,” said Volker Türk, UNHCR’s Assistant High Commissioner for Protection.

We are faced with a vicious cycle here of little help being available [...] and a culture of silence UN refugee agency protection chief Volker Türk

“And it’s clear too that we are faced with a vicious cycle here of little help being available, limited outreach to male survivors, inaccessible services, and a culture of silence – all of which reinforce a myth that this problem is rare,” he added.

It also recommends that further research be done with a view to more effectively preventing and responding to sexual violence against males in conflict and displacement. 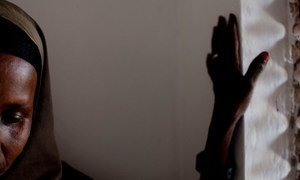 Although global understanding of sexual violence in conflict is shifting, there remains the need to tackle the root causes of such violations that lie in fundamental inequality and discrimination against women, Deputy Secretary-General Amina Mohammed told the United Nations Security Council today.