“The situation is reaching a new adverse development with the killing of former President Ali Abdullah Saleh and a number of GPC [General People’s Congress] leaders,” Ismail Ould Cheikh Ahmed, the Special Envoy of the Secretary-General for Yemen, told a closed session of the UN Security Council Tuesday.

“These events will constitute a considerable change to the political dynamics in Yemen,” he added.

Briefing alongside Mr. Cheikh Ahmed was the UN Emergency Relief Coordinator, Mark Lowcock, who underscored that the humanitarian situation in the country remains severe, with millions on the cusp of the largest famine in modern times.

Intense fighting – including airstrikes and rocket attacks – have devastated the country and brought incredible hardships on its people. Over 17 million Yemenis (close to two-thirds of the population) is food insecure while a staggering 8.5 million people are on the brink of starvation.

In all, close to 21 million people across Yemen are in need of humanitarian or protection support.

The violence has also devastated basic services in the country, all but destroyed its water and sanitation system, and sparked a deadly cholera outbreak that has claimed thousands of innocent lives – including children.

Making matters much worse is that aid workers are not able to carry out their vital mission to save lives due to the scale of fighting and insecurity.

Overnight, 25 air strikes had targeted the Republican Palace, bridges and civilian infrastructure in Sana’a, the capital of Yemen, forcing humanitarian agencies, including the UN, the Red Cross and non-governmental organizations into a lockdown.

Against this backdrop, the top UN relief official in the country, Jamie McGoldrick, had appealed Monday for a “humanitarian pause” today from 10:00 AM to 16:00 PM (Yemen time) to allow desperate civilians reach assistance and safety as well as for aid workers to reach them.

Speaking via telephone, from Sana’a, to journalists at a press briefing in Geneva today on his request for a pause in fighting, Mr. McGoldrick expressed that while he does not expect full compliance by all the parties, he hoped for some respite in the fighting to allow civilians to access supplies and medical care.

The “hallmark of the crisis,” he noted has been the general disregard for international humanitarian law.

The UN and reiterated, time and again, reiterated the obligation of the parties to the conflict to ensure civilians are protected, and health and aid workers, and civilian infrastructure not be subjected to attacks. 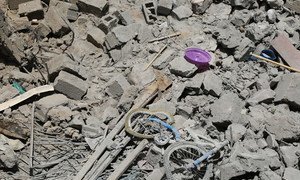 Paramount that civilians are protected in Yemen, underscores UN

Voicing concern over the dramatic escalation in fighting in the Yemeni capital, Sana’a, and surrounding areas, that have reportedly killed about one hundred people and injured many more, the United Nations called on the parties to the conflict to uphold their obligations under international law and ensure that civilians are not harmed.