UNICEF/Mackenzie
A young girl writes on a whiteboard during class at a school in Dohuk governorate, Iraq.
4 December 2017

Voicing concern over proposed amendments to laws governing marriage in Iraq – in particular the ambiguity over the legal age of marriage – senior United Nations officials called on the country to ensure adequate protection for children across Iraq.

“It is a matter of concern that these draft amendments are silent on the minimum age of consent to marriage and do not apply to all components of Iraqi society,” said Representatives of the Secretary-General on Sexual Violence in Conflict, Pramila Patten, and for Children and Armed Conflict, Virginia Gamba, in a joint statement Monday, urging reconsideration of the drafts.According to the https://childrenandarmedconflict.un.org/joint-statement-by-the-special-representatives-of-the-secretary-general-on-sexual-violence-in-conflict-and-for-children-and-armed-conflict-regarding-proposed-amendments-to-the-iraqi-personal-status-la/">statement, the Iraqi Council of Representative’s approval in principle of the draft law – that does not explicitly set the minimum age of marriage to 18-years for both women and men – represents a significant step back from commitments to prevent and address sexual violence.

The two UN senior officials also raised fears of increase in divisions within the country at a time when Iraq is recovering from the conflict with the Islamic State of Iraq and the Levant (ISIL or Da’esh).

“My Office was repeatedly assured by Prime Minister Haider al-Abadi and the Speaker of the Council of Representatives Salim al-Jabouri that the fulfilment of each of the pillars of the Joint Communiqué are essential to Iraq’s post-Da’esh reconstruction,” Ms. Patten stated.

A key pillar of the Joint Communiqué (signed by the Iraqi Foreign Minister with the UN, formally committing to prevent and address conflict-related sexual violence) is to ‘support legislative and policy reform to strengthen protection from and service response to sexual violence crimes.

Noting that the boys and girls of Iraq, already victims of grave violations resulting from years of conflict with Da’esh, are now “at risk of being deprived of their childhood,” Ms. Gamba called on the Government to “take all necessary actions to protect every child by preventing the adoption of policies that can harm children already exposed to armed conflict.”

SRSG Patten and Gamba concluded by strongly “urging the Government of Iraq to reconsider these proposed amendments to the Personal Status Law” and reaffirming their commitment “to stand with both the Government and people of Iraq to ensure that the scourge of sexual violence is eliminated and that children affected by armed conflict are protected.” 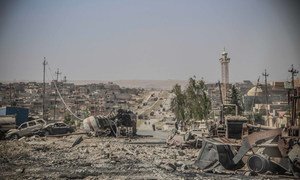 The Islamic State of Iraq and the Levant (ISIL/Da’esh) perpetrated serious and systematic violations in Iraq that amount to “international crimes” during the nine-month battle for Mosul between the terrorist group and Iraqi Government forces, a United Nations report has concluded.