At Somalia's first-ever security conference, hosted by the country’s Federal President Mohamed Abdullahi Mohamed “Farmaajo” in the capital, Mogadishu, participants agreed to speed up security sector reform and develop a plan to transfer primary responsibility for the country’s security from the United Nations-backed African Union Mission in Somalia (AMISOM) to its own security forces.

“Security is our greatest requirement if this country is to realize its full potential,” President Farmaajo said in his keynote address. “As a Government, we are absolutely determined to win the war against al-Shabaab and (Islamic State) with the full support of our international partners. Without security and counter-terrorism, there cannot be a peaceful, prosperous and progressive Somalia to which we all aspire.”

The conference was jointly convened with the UN and the African Union (AU) and featured the participation of Prime Minister Hassan Ali Khaire, the presidents of Somalia’s five federal member states, cabinet ministers and a host of ambassadors and other senior representatives of the international community. The top UN official attending was the Secretary-General's Special Representative for Somalia, Michael Keating.

In his remarks, Mr. Keatinig voiced support for the Federal Government’s commitment to pursue a comprehensive approach to security in the country.

“Defeating al-Shabaab cannot be done exclusively by military means,” he said. “Rule of law and policing are essential, stabilization activities [in recaptured areas] are essential. Countering and preventing violent extremism are also essential as well as addressing and solving the many conflicts around the country on which al-Shabaab and other extremists thrive.”

The conference was organized as a follow-up to last May’s London Conference on Somalia, which endorsed a landmark political agreement on a new national security architecture reached by federal and state leaders earlier this year and formally adopted a security pact for the country.

A communiqué issued at the end of the meeting identified three priority areas that require immediate action by Somali authorities with the support of the international community. These include the implementation of the approved national security architecture, the urgent development of a realistic, conditions-based transition plan to enable Somali security forces to take over primary responsibility from AMISOM for protecting the people and Government of Somalia, and continued international support to build the capacity of the country’s security forces and institutions.

Security has been a major issue for the east African country, which has suffered a range of violent attacks linked to extremists. In mid-October, hundreds of civilians were killed and injured in a massive car bomb blast outside the entrance to a hotel in Mogadishu’s K5 junction, which is home to government offices, hotels and restaurants.

Senior Somali Government officials and leading representatives of the international community will reconvene on Tuesday for a so-called Somalia Partnership Forum that will address the pressing humanitarian and development issues facing the country. 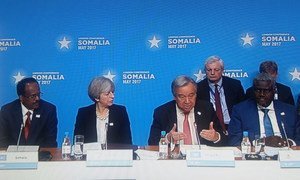 Opening a major conference on Somalia, United Nations Secretary-General António Guterres today urged the international community to support security efforts in the country battling Al-Shabaab and aid the more than six million Somalis affected by the violence and a deadly drought.