UNICEF/Ma’ad Al-Zekri
A baby is screened for malnutrition at the UNICEF-supported Al-Jomhouri Hospital in Sa’ada, Yemen.
2 December 2017
Humanitarian Aid

Top officials from across the United Nations system called on Saturday for the Saudi-led coalition to fully lift its blockade of Yemen's Red Sea ports, warning that unless commercial imports are resumed, “the threat of widespread famine in a matter of months is very real.”

The officials also announced that the United Nations is sending a team to Riyadh to discuss any concerns the coalition and Saudi Arabia may have in relation to these ports. “But we need the coalition to urgently grant unimpeded access for imports that are a lifeline for millions of people.”

They acknowledged that the partial lifting of the blockade of Yemen's Red Sea ports in recent days is allowing humanitarian organizations to resume the provision of life-saving assistance to people in desperate need.

“But given the massive scale of Yemen's humanitarian crisis, all this does is slow the collapse towards a massive humanitarian tragedy costing millions of lives. It does not prevent it,” said the UN leaders, who added: “Without the urgent resumption of commercial imports, especially food, fuel and medicines, millions of children, women and men risk mass hunger, disease and death.”

The appeal came in a joint statement by the Director-General of the World Health Organization (WHO) Tedros Adhanom Ghebreyesus, the Administrator of the UN Development Programme (UNDP), Achim Steiner, The UN High Commissioner for Refugees, Filippo Grandi, the Executive Director of the UN Children's Fund (UNICEF) Anthony Lake, the Executive Director of the World Food Programme (WFP), David Beasley, the Director General of the International Organization for Migration (IOM), William Lacy Swing, and the Under-Secretary-General for Humanitarian Affairs and UN Emergency Relief Coordinator, Mark Lowcock.

■ RELATED: More on the Yemen crisis from the UN relief wing

More than two years of relentless conflict between the Government and Houthi and allied rebels in Yemen, already the Arab world's poorest country, has devastated the lives of millions of people. An alarming 20.7 million people in Yemen need some kind of humanitarian or protection support, with some 9.8 million in acute need of assistance. This man-made disaster has been brutal on civilians.

In their statement today, the UN leaders said that the current ongoing commercial import restrictions have led to shortages of fuel, food and other essentials, driving up prices and wrecking lives and livelihoods. The price of wheat flour has risen by 30 per cent, while the price of fuel has doubled and that of trucked water has skyrocketed by 600 per cent in some locations.

Urban water networks in seven cities have run out of fuel and now depend on humanitarian organizations to fill in the gap. Other cities will shortly be in a similar situation if the blockade is not lifted, which would leave 11 million people without safe water.

In other areas, people are reducing their food consumption to dangerous levels in order to pay for the rising cost of water trucking, or are turning to contaminated water sources to meet their basic needs. This further compounds the risk of disease, especially among children.

Less than half of the health facilities are functioning, and more hospitals and health centers will close should fuel and water supplies not improve. Sewage networks in six main cities are compromised, threatening a renewed spike in the country's cholera outbreak, which has reached almost 1 million suspected cases and killed over 2,200 people.

“Yemen remains on the cusp of one of the largest famines in modern times,” says the statement, explaining that nearly 400,000 children suffer from severe acute malnutrition and face an increased risk of death. In addition, some eight million people could starve without urgent food assistance coming into Yemen.

With 90 per cent of the country's food imported, the lack of commercial imports through Red Sea ports would alone push a further three million people into starvation. “The threat of widespread famine in a matter of months is very real,” the statement warns.

“Together, we call on the coalition to urgently open up all Yemeni Red Sea ports fully and to facilitate the entry and free-flow of humanitarian and vital commercial goods.” 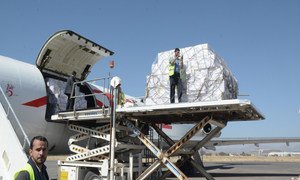