Internally displaced women and children at a World Food Programme (EFP) center in Mogadishu, Somalia. Thousands of people poured into the Somali capital in mid-2017 in search for food and water at the severe drought takes hold in remote rural regions. Photo by Giles Clarke for Getty/OCHA
1 December 2017
Humanitarian Aid

A record level of aid funding – more than $22.5 billion – is needed to deliver lifesaving assistance around the world in 2018, the United Nations Emergency Relief Coordinator said on Friday.

“Were we better financed, we would save more lives. But we would also protect more futures […],” he said, noting that it costs us about £230 a year to provide the lifesaving comprehensive assistance that we are talking about through these response plans – about 77 cents a day.

“That’s one of the cheapest investments you can make in the safety of humanity for the future, so we are hoping that, on the basis of the quality of the plans we will be able to reach higher levels of funding than we have both said we have achieved for this year,” he explained.

He noted that the amount of the Appeal is $300 million more than what was sought last year. “And that partly reflects the fact that although the agencies are getting faster, more efficient and more cost effective in what they are doing, the cost of operating in some of the places where we have to operate is growing because they are highly insecure and protecting the aid operation is becoming more challenging.”

In Yemen, a child dies every 10 minutes, said Mr. Lowcock, who is also the UN Under-Secretary-General for Humanitarian Affairs, adding that the country is likely to remain the world’s worst humanitarian crisis.

Twenty million of the country’s 25 million people are in need of assistance, and seven to eight million “right on the brink of famine,” Mark Lowcock added.

He repeated his call for the Saudi-led coalition to continue unwinding its blockade - put in place after a rocket attack by Houthi fighters three weeks ago – warning of a humanitarian crisis the like of which the world “has not seen in decades” if it is not done.

Acknowledging that humanitarian aid on its own could not solve chronic instability, the UN aid chief said it was a personal priority to work with governments on development and peacebuilding to address the root causes of their problems.

The fact that this year’s appeal is higher than in 2016 reflects growing needs, not only in countries in the international spotlight, such as Yemen, Myanmar and Syria.

Many countries had seen marginal progress in the last year however, according to the UN’s humanitarian coordinating agency, OCHA. These include Afghanistan, Ethiopia, Iraq, Mali and Ukraine.

Also in Geneva for the UN appeal, Save the Children International warned that youngsters are among the most vulnerable victims of humanitarian crises.

The organization’s head Helle Thorning-Schmidt told journalists how protracted conflict was “stealing” children’s lives twice; first when they were displaced by conflict, and then for a second time when they were unable to return home.

She told of tremendous suffering in Yemen, where children were dying of diseases that had been overcome 100 years ago elsewhere, before adding that her aid teams had no access to other vulnerable communities in countries including Libya and North Korea.

♦ Receive daily updates directly in your inbox - Subscribe here to a topic.
♦ Download the UN News app for your iOS or Android devices.
relief 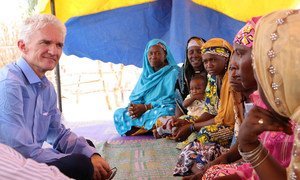 New head of UN Under-Secretary-General for Humanitarian Affairs and Emergency Relief Coordinator, Mark Lowcock, speaks to UN News about why he accepted the post, his first weeks on the job, and what he hopes to accomplish during his tenure.