Previewing what he said will be “not just a normal round of talks,” Staffan de Mistura, the United Nations Special Envoy for Syria, insisted Thursday there should be no preconditions heading into the current round of discussions aimed at resolving the over six-year-long Syrian conflict that has resulted in immense human suffering.

“We have […] been talking about the rules of the game, and therefore reemphasizing: no preconditions, Staffan de Mistura told reporters in Geneva, after meeting with the Government and opposition delegations.

The current round of talks will be taking place against “quite a backdrop of intense diplomatic activity” in recent weeks to find a political solution to the Syria crisis, following important meetings in Viet Nam’s DaNang, Russia’s Sochi, and Saudi Arabia’s Riyadh.

And after the territorial losses of the Islamic State of Iraq and the Levant (also known as ISIL/Da’esh) in Raqqa and Deir ez-Zor, “there has been now a moment of truth; we need to find a political solution,” Mr. de Mistura underscored.

The UN mediator noted that fact that the warring parties are still not meeting in the same room is by no means a deal-breaker.

What is important, he added, is “substance,” and the search for “commonalities” between the two delegations.

He also clarified that during the intra-Syrian talks, the issue of the presidency did not come up.

“We have not discussed the issue of presidency. We have been discussing the 12 points/principles, and you will see they are of a broad nature but they have an impact on everything in the future constitution; and we have started addressing the issue about how to proceed on a new constitution. So that issue has not even come up,” said Mr. de Mistura, adding that he wants to believe that the “issue should come up with the Syrians through UN supervised elections according to Security Council [resolution 2254 (2015)].”

He also announced that the talks have been extended until mid-December.

Also, earlier Thursday, Jan Egeland, the UN Special Advisor for Syria, appealed for greater and more urgent efforts to enable safe evacuations of some 500 people, including 167 children, besieged eastern Ghouta, on the outskirts of Damascus.

“Men with power are sitting with lists of children that are in urgent need of being evacuated, if not they will, many of them, die; and we still do not have the green light,” said Mr. Egeland, expressing hope that the evacuations are possible with the Government’s approval despite insecurity adding that calm could then be negotiated with both sides.

“It is heart breaking; it is intolerable; it will be a stain on our conscience for a very, very long time, unless it can happen very soon. I was told today that nine patients on this list have died,” he added.

According to estimates more than 400,000 people are trapped in eastern Ghouta, cut off from much needed food and relief assistance.

Yesterday, briefing the Security Council, the UN Emergency Relief Coordinator had also underscored the direness of the situation there and called for urgent humanitarian access to ensure that the most vulnerable can be provided much needed support. 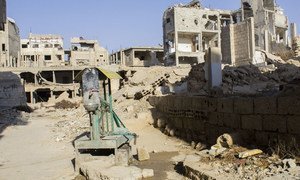 The conflict in Syria – now into its seventh year, longer than World War II – continues to ratchet up misery on its people, with millions living in besieged and hard-to-reach areas, a third of the country’s children out of school, and over half of its health facilities rendered inoperable, the United Nations top relief official said today.