UNOCHA
One of the manual water pumps around East-Ghouta serving as one of the very few water sources in the besieged area. Water can be unsafe as it is not tested nor purified.
29 November 2017

The conflict in Syria – now into its seventh year, longer than World War II – continues to ratchet up misery on its people, with millions living in besieged and hard-to-reach areas, a third of the country’s children out of school, and over half of its health facilities rendered inoperable, the United Nations top relief official said today.

The situation is most dire in rural Damascus’ eastern Ghouta (where 94 per cent of the besieged population is located), where fighting has seen a recent escalation and where, despite efforts of humanitarians, only about 100,000 out of an estimated population of 400,000 have received food assistance this year.

Deaths of people, especially children, from preventable can be prevented if aid convoys can be increased and made more regular, he expressed, adding: “Against this background, news over the last two days of a ceasefire in eastern Ghouta would be – if true and if sustained – important.”

In his briefing, the senior UN relief official also spoke of the recently released 2018 Humanitarian Needs Overview for Syria as well as of increased displacement in north-west Syria, worsening fighting in north-east Syria, threats of explosive remnants of war and improvised explosive devices and the precarious humanitarian access as a result.

“At the same time, new restrictions on access and aid delivery in the north-east are limiting access to a number of people we had previously been able to reach with help,” said Mr. Lowcock, noting that since 9 November, the UN has faced a series of bureaucratic impediments imposed by the parties in the area resulting in the curtailment of humanitarian assistance for much of the past month.

Further, concerning delivery of aid, he also updated the Security Council of the efforts of UN actors to ensure aid reaches those that need it as well as of the challenges they face in the process.

“It is clear that each of the three modes of delivery [to Government-controlled areas, cross-line deliveries, and cross-border assistance] is critical for the people of Syria, and that there is complementarity between them. As needs remain high, it is important to preserve all means of access,” said the UN official, stressing that the renewal of the Security Council resolution 2165 (2014), which authorized the UN and relief agencies to use the most direct routes for aid delivery is “essential to save lives.”

Concluding his briefing, Mr. Lowcock also told the Security Council that following consultations with the authorities, he plans to visit Syria in early January 2018 to assess the situation and to discuss assistance to those in need can be improved. 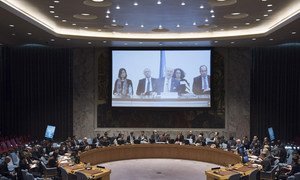 ‘No preconditions’ accepted from Syrian parties, UN envoy says ahead of Geneva talks

Ahead of fresh intra-Syrian talks on Tuesday in Geneva, the United Nations mediator said Monday that the crisis now has the potential to move towards “a genuine political process.”