UNICEF/Madhok
On 25 November 2017, a shipment of vaccines is delivered to the Sana’a International airport to protect Yemeni children from diseases such as diphtheria and tetanus.
28 November 2017
Humanitarian Aid

“The situation in Yemen is currently the biggest humanitarian crisis in the world and aid is urgently required in order to avoid famine,” said Bettina Luescher, spokesperson for the World Food Programme (WFP), at a press briefing in Geneva.

She said two daily flights to the Yemeni capital, Sana’a, from Jordan’s Amman and one from Djibouti will continue until the end of this month, and a WFP-chartered vessel carrying 25,000 metric tons of wheat grains, now docked at Saleef port, will be unloaded over the coming days.

Ms. Luescher stressed that it is essential that commercial imports, which accounts for 90 per cent of the country’s food requirements, also be allowed in to Yemen, as the UN can not feed the entire population, and that continued access to Hudaydah and Saleef is especially vital as those ports are equipped with unloading, storage and milling facilities.

WFP has more than doubled the number of people it reaches every month from 3.5 million people in January to a current average of seven million people. Due to the funding shortfall of $362 million, however, some people are only receiving half-rations.

Alessandra Vellucci, spokesperson for the UN Information Service in Geneva, said fuel is urgently needed to operate generators for hospitals, water well pumps and sanitation units and to facilitate the trucking of drinking water and food to vulnerable people.

Meanwhile, the World Health Organization (WHO) is largely focusing its efforts on the diphtheria outbreak. There have been 194 clinically suspected cases of diphtheria and 20 deaths in 13 governorates, said spokesperson Christian Lindmeier.

He said that the outbreak is spreading faster than WHO anticipated. It can only be tackled if medicines, supplies and vaccinations are allowed to enter and move around the country.

Mr. Lindmeier noted that a WHO team left Sana’a on Sunday and travelled to al-Sadah and Yarim districts in Ibb Governorate, where more than 80 per cent of the diphtheria cases have been reported, to collect samples and analyse them on the spot.

Between Tuesday and Friday, the team will provide training for the rapid response team on the case management of diphtheria at local health centres in Ibb city.

A diphtheria vaccination campaign targeting 300,000 children aged under 12 months began in remote areas on Saturday. Further vaccination rounds for priority districts for 940,000 children under 5 years of age and 2.3 million children and young adults are scheduled for December, he said.

The lifting of the blockade on the movement of humanitarian goods will enable the shipping of 361 tons of medicines and medical supplies that have been blocked in Djibouti. The supplies to be shipped over the coming days include enough antitoxin to treat 1,000 cases of diphtheria. 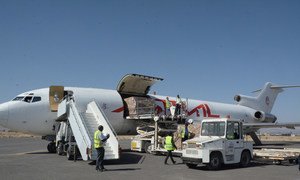 The United Nations Children’s Fund (UNICEF) on Monday warned that more than 11 million Yemeni children – almost every single Yemeni boy and girl – are in acute need of humanitarian assistance, despite the successful delivery of 1.9 million doses of vaccines to Sana’a airport on Sunday.