Solutions to today’s critical development challenges exist in the Global South, and every country – large or small, emerging economy or least developed – has something to offer to the world, a senior United Nations official said today, as the 2017 Global South-South Cooperation Expo opened in Antalya, Turkey.

“The advantage and beauty of South-South cooperation is that this modality of international relations relies on solidarity expressed in concrete and demonstrable sharing of technical know-how, experience and resources among developing countries,” said Jorge Chediek, the Secretary-General’s Envoy on South-South Cooperation and Director of the UN Office for South-South Cooperation (UNOSSC), at the opening ceremony.

Hundreds of participants from over 120 countries, including government ministers, development agency directors, and international and civil society stakeholders, have gathered for the world's preeminent forum for showcasing, sharing, and scaling up innovative local solutions to global problems.

The event, hosted by the Government of Turkey and coordinated by UNOSSC, will focus on solutions “for the South, by the South” throughout the week. The theme “South-South Cooperation in the Era of Economic, Social and Environmental Transformation: The Road to the 40th Anniversary of the Adoption of the Buenos Aires Plan of Action (BAPA+40),” aims to engage stakeholders to scale up concrete solutions from the South to achieve the 2030 Agenda for Sustainable Development.

“South-South cooperation has gained a new centrality with respect to the 2030 Agenda, always complementing North-South cooperation, not replacing it. And despite the challenges before us, South-South approaches provide a window of opportunity for all of us to share hard-won lessons,” Mr. Chediek said.

Since its inception in 2008, the Expo has featured documented best practices from hundreds of partner countries, UN agencies, private-sector enterprises and civil society organizations.

“Turkey began providing development assistance to countries in the region in the 1920s,” said Mevlüt Çavusoglu, Foreign Minister of Turkey.

Today the Turkish International Cooperation and Development Agency (TIKA) operates in over 120 countries, he explained, adding that Turkey ranks second in the world for humanitarian aid as per percentage of its gross national income.

Earlier this year, Turkey signed an agreement with the UN to establish a Technology Bank for Least Developed Countries to strengthen the science, technology and innovation capacity in the world’s poorest countries toward achieving the 2030 Agenda. “Knowledge-sharing is a priority for Turkey,” the Minister said.

One of the highlights of the week is the Exhibition, which was inaugurated following the opening ceremony and boasts 58 booths and 3 photo exhibits showcasing tested development solutions from the South.

The Expo takes place in the lead up to the 40th anniversary of the historic adoption of the 1978 Buenos Aires Plan of Action (BAPA).

The Plan of Action set the agenda for the innovative concept of South-South cooperation and provided a foundation to build the institutional mechanisms and structures that have contributed to shaping the international development agenda and changing the landscape of the global South as it is seen today. Argentina will host Second High-level UN Conference on South-South Cooperation, marking the 40th anniversary of the BAPA, in March 2019. 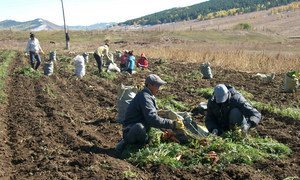 A United Nations expo next week in Turkey is set to highlight the critical role of South-South cooperation in achieving the Sustainable Development Goals (SDGs), in light of the vast array of knowledge, skills, expertise and resources that is, and can further be, shared among developing countries.