UN Photo/Marco Dormino
A convoy of MINUSMA vehicles drives through the streets of Menaka in northern Mali.
24 November 2017
Peace and Security

Four United Nations peacekeepers and a member of the Malian armed forces were killed and 21 others were wounded on Friday in what Secretary-General António Guterres called “outrageous” attacks against the UN mission in the country.

Mr. Guterres joined his Special Representative for Mali, Mahamat Saleh Annadif, and the Security Council in strongly condemning the attacks against the UN Multidimensional Integrated Stabilization Mission in Mali (MINUSMA) in the Ménaka and Mopti regions.

“The Secretary-General conveys his deepest condolences to the Governments of Burkina Faso, Mali and Niger and his profound sympathies to the families of the victims. He wishes a swift recovery to the injured,” his spokesperson said in a statement.

“He pays tribute to the dedication of the brave women and men of MINUSMA for implementing and defending the Mission's mandate as well as to the members of the Malian armed forces, despite the increasingly challenging security environment.”

In a statement issued to the press, the 15-member Security Council underlined that “attacks targeting peacekeepers may constitute war crimes under international law.”

The Council reiterated that “any acts of terrorism are criminal and unjustifiable, regardless of their motivation, wherever, whenever and by whomsoever committed,” reaffirming the need for all States to combat, by all means, threats to international peace and security caused by terrorist acts.

It further stressed the importance of MINUSMA having the necessary capacities, including combat convoy companies, to fulfil its mandate and promote the safety and security of the UN peacekeepers. 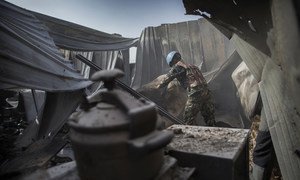