Participants from Europe, Central Asia and North America gathered this week at a United Nations forum in Geneva to explore ways to combat racial discrimination and to ensure effective promotion and protection of the human rights of people of African descent.

Speaking at the opening of the two-day meeting, held on 23 and 24 November, UN High Commissioner for Human Rights Zeid Ra'ad Al Hussein said that people of African descent continue to endure pervasive discrimination in law as well as in practice, extending from neighbourhoods and schools to workplaces, political representation and justice.

“Whether they are descendants of the victims of slavery brought to North America and Europe against their will, or more recent migrants, people of African descent are frequently denied rights and experience exclusion, humiliation and impoverishment as a result of racial discrimination,” said the High Commissioner.

In particular, he raised concern over practises of racial profiling and patterns of police violence in the United States, as well as the disproportionate imposition of capital punishment on people of African descent and other racial minorities.

He also voiced concerns over “systemic anti-Black racism” in the Canadian criminal justice system, including evidence of extensive patterns of racial profiling by law enforcement, as well as under-representation of people of African descent in political spheres across many countries in Europe.

“We – all human beings – are equal; and therefore should enjoy an equal right to dignity,” he added, noting that just and peaceful societies for all can be created only when nobody is subjected to prejudice and segregation.

The meeting was held as part of the awareness-raising campaign for the International Decade for People of African descent (2015-2024).

Also speaking at the occasion, Sabelo Gumedze, the Chairperson of the Working Group of Experts on people of African descent, stated that the International Decade is an important instrument to address the common issues facing people of African descent, such as racial discrimination, xenophobia, Afrophobia and related intolerance; underrepresentation in political and judicial sectors; and inequality access to quality education, health services and housing.

Underscoring the need to combat extreme violence, racial bias and hate speech which people of African descent continue to face, he called for urgently addressing the root causes of racial discrimination “in an honest debate about history and its connection to modern day racism.”

Other key speakers at the meeting included Opal Tometi, the Co-founder of Black Lives Matter and Executive Director of the Black Alliance for Just Immigration; Anastasia Crickley, Chairperson of the Committee on the Elimination of Racial Discrimination; and Rokhaya Diallo, French journalist and activist.

The meeting also saw three panel discussions on the themes of recognition, justice and development.

Organized by the Office of the UN High Commissioner for Human Rights (OHCHR), the meeting is one of five regional meetings that focus on trends, priorities and challenges at the national and regional levels to effectively implement the Decade’s Programme of Activities. 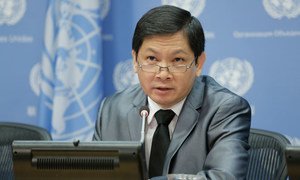 People of African descent in Germany suffer racial discrimination, Afrophobia and racial profiling in their daily lives, but their situation remains largely invisible to the wider society, a United Nations expert panel said today at the end of its first official visit to the country.