Strongly condemning the attack on a state-level Ombudsperson and his family in Mexico, the United Nations expert on human rights defenders has called on the authorities to investigate the incident and bring the perpetrators to justice.

Silvestre de la Toba Camacho, the Ombudsperson in Mexico's Baja California Sur state, along with his son died in the 20 November attack and his wife and daughter were seriously injured.

“I condemn the killing of Silvestre de la Toba Camacho in the strongest possible terms, and am equally outraged by the assault on his family,” said Michel Forst, the UN Special Rapporteur on the situation of human rights defenders, in a news release issued by the Office of the UN High Commissioner for Human Rights (OHCHR).

“I call on the state and federal authorities to ensure that a thorough investigation is conducted and the perpetrators are brought to justice.”

Earlier this year, at the end of his mission to Mexico, Mr. Forst had underscored that ending the country's current cycle of impunity was one of its biggest challenges.

“The best way to ensure the safety of human rights defenders is by bringing those who attempt to harm them to justice,” the rights expert added in the news release today.

Further, Mr. Forst also underscored the importance of the role of national human rights institutions in the protection of human rights and stressed that governments should put in place protection schemes to ensure that persons who work for them are able to perform their functions in a safe and autonomous manner.

In particular, he urged the Government of Mexico to set up protection mechanisms for defenders at risk, including people working in national human rights institutions. 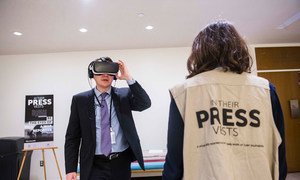 The head of the United Nations agency tasked with defending press freedom today denounced the killing of journalist Miroslava Breach Velducea in the capital of northern Mexican state Chihuahua on 23 March 2017.