UNICEF/Moreno Gonzalez
A woman walks in the street of Roseau, capital of Dominica, which has struggled to overcome the severe impact of two category 5 hurricanes which tore through the region in September 2017.

22 November 2017
The international community mobilized over $1.3 billion in pledges and more than $1 billion in loans and debt relief to help Caribbean nations recover from the strong hurricanes that pummelled the region a few months ago, during a meeting at United Nations Headquarters on Tuesday.

“I think we’re extremely happy with the results of the conference,” said Stephen O’Malley, the UN Resident Coordinator and Resident Representative of the UN Development Programme (UNDP) for Barbados and the Organization of Eastern Caribbean States.

The powerful category-5 hurricanes Irma and Maria hit the Caribbean in September causing a number of deaths and widespread devastation in the Caribbean. According to the latest needs estimates, recovery costs are expected to surpass $5 billion.

Barbuda, the smaller of the two-island State of Antigua and Barbuda, and Dominica were among the most severely affected, along with Anguilla, British Virgin Islands, The Bahamas, Turks and Caicos Islands. Haiti and St. Kitts and Nevis also suffered damage, while St. Maarten/St. Martin as well as Cuba, the Dominican Republic and Puerto Rico were also impacted.

“It is a very long road to recovery,” Mr. O’Malley said in an interview with UN News, noting that while the roads in the capital, Roseau, are more or less clear and water is back, only three per cent of the country currently has electricity. In addition, agriculture has been badly affected. “It’s still a hard time.”

Meanwhile, on Barbuda, water was restored yesterday and people are trickling back to the island. The roads have been cleared and people are beginning to repair their homes, and trying to determine whether they can come back and resettle or wait longer until the conditions are right for returning. Schools have not re-opened and medical services are very limited, Mr. O’Malley noted.

Nearly 400 high-level representatives from governments, multilateral and civil society organizations and the private sector gathered in New York, along with the Secretaries-General of the UN and the Caribbean Community (CARICOM) to help the affected countries “build back better.”

“They want to be a climate-resilient region,” Mr. O’Malley stated, explaining that this involves practical steps from the way a country’s road network and electricity grid are designed to ensuring that schools and hospitals are built to withstand the impact of climate change.

“It’s your infrastructure. It’s also better planning and preparedness by the governments so that they can respond more quickly,” he pointed out. “They have the capacity to do that […] there’s a variety of different things there to make everybody more climate resilient.”

“We need a new generation of infrastructure that is risk-informed, to underpin resilient economies, communities and livelihoods,” he told the gathering. 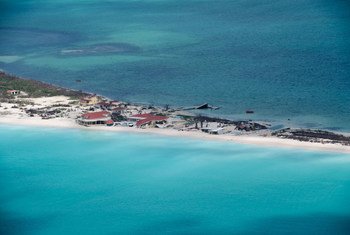