“Their brutality knows no bounds: sexual exploitation, forced labour, the removal of bodily organs and slavery are the tools of their trade,” said Secretary-General António Guterres, Tuesday, alongside Yuri Federov, the head of the UN Office on Drugs and Crime, connected via video conference.

“We must act urgently to protect the human rights and dignity of migrant populations, [bring] the perpetrators to justice, [and] increase humanitarian aid,” he added.

Noting, in particular, the horrific images of African migrants being sold as “goods” in Libya, Mr. Guterres also stressed the need to help Libyan authorities strengthen their own capacity to protect and provide for vulnerable men, women and children.

At the same time, he highlighted the urgent need to create more opportunities for regular migration, to restore the integrity of the refugee protection regime, and to increase the number of refugees resettled in developed countries.

“We must also do more to support the victims and survivors of trafficking,” Mr. Guterres said, underlining that they should be treated as victims of crime and not detained, prosecuted or punished for unlawful activities they were compelled to engage in, in order to survive.

Also in his briefing, the UN chief recalled the steps taken by the Security Council – the body within the UN system tasked with maintaining international peace and security – including through resolutions to combat financial flow to traffickers.

He also stated that along with the Political Declaration on the implementation of the Global Plan of Action, adopted by the General Assembly this September, the global community has built a framework for action rooted in international law.

“Cooperation, mutual legal assistance and information-sharing are the mainstays of our activities,” he added, calling for intensification of efforts by Member States as well as the UN system and use all tools at their disposal to combat human trafficking.

Together with action on these fronts, he cited the need to address poverty and exclusion in line with the 2030 Agenda for Sustainable Development.

“The international community’s commitment is being tested,” said Mr. Guterres, calling for a display of “determination to end human trafficking, help its many victims and hold those responsible accountable for their crimes.”

Also at today’s meeting, Yuri Fedotov, the Executive Director of the UN Office on Drugs and Crime urged the international community for a global partnership against human trafficking.

On the screens, Mr. Yury Fedotov, Executive Director of the United Nations Office on Drugs and Crime

“Collective horror at [the situation in Libya] serves an important purpose: it can quicken the pace of our actions,” he said.

Mr. Fedetov also stressed that UNODC is “fully prepared” to help Libyan authorities strengthen their ability to prosecute the criminals behind such appalling crimes as well as to support them investigate the finances flowing from such activities.

Other speakers at the open debate included Maria Grazia Giammarinaro, UN Special Rapporteur on trafficking in persons, especially women and children, and Smail Chergui, Commissioner for Peace and Security of the African Union.

The Security Council open debate on preventing trafficking in persons in conflict situations was convened by Italy, the Council President for the month of November.

The debate also saw the unanimous adoption of a resolution by the 15-member Council in which it called on all Member States “to reinforce their political commitment to and improve their implementation of applicable legal obligations to criminalize, prevent, and otherwise combat trafficking in persons.”

The text also urged for strengthening efforts to detect and disrupt such activities, including through robust victim identification mechanisms and providing access to protection and assistance for identified victims.

It also called for combatting crimes that might be connected with trafficking in persons in areas affected by armed conflict, such as money-laundering, corruption, the smuggling of migrants and other forms of organized crime. 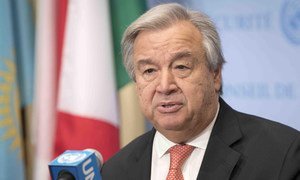 Expressing horror at news reports and videos showing African migrants in Libya allegedly being sold as slaves, United Nations Secretary-General António Guterres on Monday called on the authorities to urgently investigate the situation and bring the perpetrators to justice.