UN Photo/Albert Gonzalez Farran (file)
A child is sheltered in Kalma camp for internally displaced people(IDPs), South Darfur. Thousands of people that have fled unrest in the area settled in the Kalma and Al Salam camps for IDPs, located on the outskirts of Nyala.
21 November 2017
Humanitarian Aid

“I urge the Government to address fundamental issues that are preventing the return of displaced people, such as continued violence, including from armed militias, which raise continuing and justifiable fears for their safety and the lack of basic services that leave them dependent on aid,” UN High Commissioner for Human Rights Zeid Ra'ad Al Hussein said in a news release Tuesday.

Complied by the Office of the UN High Commissioner for Human Rights (OHCHR) and the African Union-UN Hybrid Operation in Darfur (UNAMID), the report details the situation of internally displaced people (IDPs) from January 2014 to December 2016, a period largely marked by the Government military campaign “Decisive Summer” that led to mass civilian displacement.

The report says there are “reasonable grounds” to believe that the military operations resulted in serious violations of human rights law and international humanitarian law.

While calling on the Government to carry out a prompt and comprehensive disarmament of armed militias to create an enabling and safe environment for IDPs to return, the report emphasizes the need for extensive consultations with IDPs to ensure that their return and reintegration are carried out in full respect of their rights.

The report however notes that despite a ceasefire between the Government and various armed opposition groups, which has largely held since June 2016, violence against IDPs remains widespread and impunity for human rights violations persists.

While State governments, native administrations and traditional leaders have made considerable efforts to prevent and respond to such violence, the underlying causes of such conflict, remain unaddressed, the report says.

In the majority of the 66 camps across Darfur, UNAMID continued to document cases of random shootings at night, acts of criminality and harassment of displaced persons and sexual violence, including rape, within and around IDP camps and farmlands.

Victims cited the absence of police stations, lack of confidence in the authorities, social stigma and fear of reprisals as reasons for not reporting the attacks.

“The cessation of hostilities has provided the opportunity to focus on the situation of IDPs, which is so crucial to achieving peace. I urge the Government of Sudan to implement key elements set out in the Doha Document for Peace in Darfur, and renew my call to all parties to fully engage in efforts to bring lasting peace to Darfur,” said UNAMID Joint Special Representative Jeremiah Mamabolo.

♦ Receive daily updates directly in your inbox - Subscribe here to a topic.
♦ Download the UN News app for your iOS or Android devices.
Sudan|Darfur 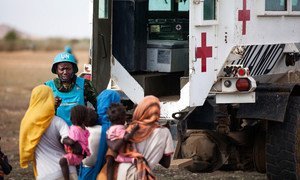