Two draft resolutions – one sponsored by the United States and another led by Bolivia – were defeated in the United Nations Security Council Thursday, blocking renewal of the international inquiry into chemical weapons attacks in Syria.

With a 'no' vote from Russia, as well as a negative vote from Bolivia, and abstentions by China and Egypt, the Council failed to adopt the US text that would have renewed for one year the mandate of the Joint Investigative Mechanism (JIM) of the Organisation for the Prohibition of Chemical Weapons (OPCW) and the UN, which is set to expire on 17 November.

A negative vote – or veto – from one of the Council's five permanent members (China, France, Russia, United Kingdom and the United States) means a resolution cannot be adopted. This marks the 10th time Russia has moved to block Council action on Syria since the conflict broke out six years ago.

Ahead of today's action on the US-led text, the Bolivian draft on extending the Mechanism, also for one year, was rejected after first being tabled by Russia and then withdrawn. The text was rejected by a vote of four in favour to seven against with four abstentions.

In late October, ahead of the release of the Joint Mechanism's final report, the Security Council failed to adopt a similar measure due to a negative vote from Russia.

The JIM was established unanimously in 2015 to identify “to the greatest extent feasible” individuals, entities, groups or Governments perpetrating, organizing, sponsoring or otherwise involved in the use of chemicals as weapons in Syria.

In a briefing just last week, Edmond Mulet, Head of the Mechanism told the Council that the Islamic State in Iraq and the Levant (ISIL/Da'esh) was responsible for using sulfur mustard in a September 2016 attack in Umm Hawsh and that the Syrian Government was accountable for the release of sarin in an April 2017 attack in Khan Shaykhun.

“There has been sufficient evidence of a credible and reliable nature to make [these] findings,” he said of the Mechanism's report, which was released on 26 October.

Mr. Mulet stressed that despite the challenges of investigating complex cases during an armed conflict, the Mechanism has taken great care to ensure that its methodology and findings were technically and scientifically sound.

Find out more about Syria and the OPCW here 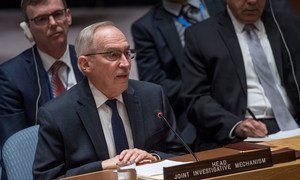 The Islamic State of Iraq and the Levant (ISIL/Da’esh) was responsible for using sulfur mustard in a September 2016 attack in Umm Hawsh and the Syrian Government was accountable for the release of sarin in an April 2017 attack in Khan Shaykhun, the head of a Security Council-mandated investigation said Tuesday.