In Colombia, UN political chief urges parties to ‘stay the course’ set out in peace accord

More must be done to ensure that the remarkable gains of the first phase of Colombia’s peace process are maintained, the top United Nations political official has said, wrapping up a visit to the country with an appeal to all Colombians to rally behind the accord, especially to ensure that former combatants are reintegrated into civilian life.

"I arrived this week, at the request of the Secretary-General, to convey a sense of growing concern about how the peace process has been evolving over the past several months,” the Under-Secretary-General for Political Affairs, Jeffrey Feltman, told reporters there on Wednesday.

Despite a range of commendable activities under way by the Government, the Revolutionary Armed Forces of Colombia (FARC) and the international community, Mr. Feltman highlighted three concerns, beginning with the lack of an overall strategy for reintegration, concrete plans and resources to enable its success.

“The drifting of a number of FARC members out of the zones, for a range of reasons that include joining the so-called ‘dissidents’ is a troubling sign of what could be the result on a wider scale if reintegration efforts are not very substantially accelerated,” Mr. Feltman stated.

Secondly, he underscored his apprehension over the security situation in former conflict zones, particularly areas in which FARC vacated while their laying down their arms to convert to an unarmed political movement.

“We share the deep concern about the reported vacuums of authority in many of these areas and the resultant insecurity for communities as other illegal groups move in to fill the void,” he underscored.

Citing Monday’s decision by the Constitutional Court on the Tribunal, he expressed hope that Congress would quickly adopt the implementing legislation, asserting, that: “This would only be consistent, in our view, with the decision of the same Parliament to ratify the peace agreement one year ago.”

On the ceasefire between the Government and the National Liberation Army, the Under Secretary-General said: “We hope that the parties can come to a timely decision on its extension past 9 January, and to communicate that as soon as possible to the Security Council.”

While recognizing that the peace process is subject to legitimate debate, Mr. Feltman appealed to all of Colombia’s institutions, parties and to the public at large, saying that despite differing views, “all surely can also see the national interest in ensuring that regions which for more than five decades have been besieged by lawlessness, violence and under-development are now stabilized and integrated fully into the economy and governance.”

“It is our strong view that this can be achieved by the robust implementation of the Peace Agreement,” he added. 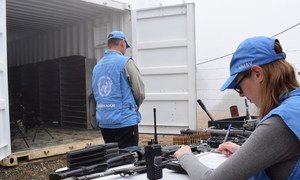 Acting unanimously, the United Nations Security Council today expanded the mandate of the UN Verification Mission in Colombia, tasking it to monitor a temporary bilateral ceasefire between the Colombian Government and the National Liberation Army (ELN) armed group.