“However, those positive developments have not led to the voluntary and sustainable return of internally displaced persons,” said Bintou Keita, Assistant Secretary General for Peacekeeping Operations, noting that nearly one third of Darfur’s population remained displaced.

Presenting the Secretary General’s latest report on the African Union UN Hybrid Operation in Darfur (UNAMID), she said the slow returns reflected anxiety about security and lack of confidence about present and future prospects, as progress has been slow on addressing such issues as land, poor resource management, accountability, and security sector reform.

The political process to negotiate a settlement of the conflict in Darfur with non signatories to the Doha Document for Peace in Darfur remains stalled, she said, adding that armed clashes between Government and non signatory forces have subsided.

Describing the Doha Document as integral to addressing underlying communal tensions, she said its full implementation is an entry point for sustaining peace because it touches on the causes of the decades long conflict, including land, displacement and relationships with nomadic herders.

The Government has begun the next stage of its disarmament campaign – the forced collection of weapons – which has raised tensions among militia groups not aligned with Government forces.

She went on to report that intercommunal violence also persisted. On 7 November, UNAMID prevented a group of armed Arabs from entering the internally displaced persons site, she said, adding that on 10 November, the mission intercepted a group of Arab nomads firing randomly on the outskirts of Sortony.

Emphasizing the importance of augmenting capacity to support longer term peacebuilding activities, she said UNAMID and the UN country team have finalized the integrated strategic framework for 2017 2019, which set out priorities on the rule of law and human rights, durable solutions, and peacebuilding for human security.

With the closure of 11 team sites and reduced numbers of military and police personnel, the mission’s civilian staffing has been readjusted and its budget for 2017 2018 revised, she said.

Ms. Keita went on to report that the Jebel Marra Task Force is expected to become operational on 1 January 2018, but voiced regret that the allocation of land on which to open a new team site in Golo is still pending.

Establishing that new team site will be essential to underpinning the concept of reconfiguring UNAMID, and goes hand in hand with the mission’s withdrawal from more stable parts of Darfur, she explained.

In conclusion, she said the level of cooperation between UNAMID and the Government of Sudan has been positive overall, although challenges remain in terms of access restrictions and customs clearance at Port Sudan. 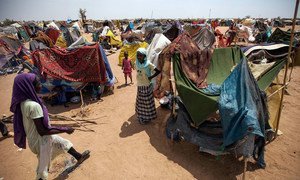 The joint African Union-United Nations peacekeeping mission in Darfur today urged “the utmost restraint” by all parties after clashes between government forces and internally displaced persons at the Kalma camp led to the death of at least three IDPs and injuries to some 26 others.