Noting recent momentum to advance democracy and good governance in Kosovo, the head of the United Nations Mission there urged for more emphasis on rebuilding trust and reconciliation, including through engagement with women and the youth, as well as on overcoming challenges related to freedom of cultural and religious identity.

“With the end of the election cycle, the time for action now moves ahead of the time for excuse,” Zahir Tanin, Special Representative of the Secretary-General and the head of the UN Mission in Kosovo (UNMIK), told the Security Council Tuesday.

“It is important that the potential for embarking on a sustainable peace process not be hindered by inflexibility or simple inaction,” he added, calling all parties to play their part in the process.

In his briefing, Mr. Tanin informed the Security Council that 40 new judges and 13 new state prosecutors from the Serb community were sworn into office in Kosovo, who would work as part of a unitary Kosovo justice system.

He, however, noted that the implementation of agreements made in 2013 and earlier, continue, at best, to be sporadic and variable.

"Within the framework of the European Union (EU)-facilitated dialogue, technical implementation needs more meaningful commitment from both sides,” said the UN envoy, noting that the most obvious gap is the lack of progress towards the implementation of the agreed Community/Association of Serb-majority municipalities.

Regarding Central European Free Trade Agreement (CEFTA), the UNMIK said that Pristina representatives attend all CEFTA meetings, and that UNMIK’s participation is limited to the requirements of the legal statutes.

“This participation continues strictly to the extent required by CEFTA members to ensure its functionality, which in turn supports economic opportunity throughout the region,” he said, noting the importance of economic and employment opportunities as well as addressing corruption, ensuring public accountability at all levels and combatting organized criminality.

“The final objective of [UNMIK] remains clear, with your support: sustained peace, and the

opportunities it brings for individuals to fulfil their aspirations and their potential,” concluded Mr. Tanin. 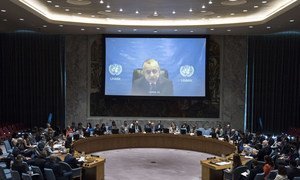 Following the parliamentary elections of 11 June, which took place without “major irregularities or incidents,” Kosovo has entered a “period of uncertainty” marked by reconfiguring the political landscape and a “functional void,” the Special Representative of the United Nations Secretary-General for Kosovo Zahir Tanin told the Security Council today.