A proposal to deliver vitally needed aid to war-ravaged Yemen via smaller ports than those under blockade will not solve the catastrophic humanitarian situation there, a senior UN official said Tuesday.

Speaking over the phone to journalists in Geneva, Jamie McGoldrick, the Resident and Humanitarian Coordinator for Yemen, called for the reopening of the country’s major import hubs, Hodeida and Saleef, along with Sana’a airport.

Smaller ports such as Aden in southern Yemen and Jazan – which is in neighbouring Saudi Arabia – lack the capacity to handle the amount of fuel, food and medicines that’s needed, Mr McGoldrick said.

“Coming from Jazan in the north or coming from Aden in the south to serve the bulk of the population that we have identified, in the northern part of the country, it would be very difficult in many places because of for security issues, because of logistical issues” he said.

This would increases the cost of supplies by an estimated $30 per metric tonne “and this is something that would then reduce the amount of money we have to serve the population and right now our humanitarian response plan is only 57 per cent funded,” explained Mr. McGoldrick.

He said that Yemen has just 20 days’ worth of diesel left in the north, and three months’ reserves of wheat, adding that while he has heard reports that Aden and other ports were opening, there has been no confirmation of it.

The decision to blockade Yemen was taken by the Saudi-led coalition – engaged there in a three-year war against Houthi militants, which, according to the UN Office for the Coordination of Humanitarian Affairs (OCHA), has left more than seven million close to famine and 21 million needing assistance in one of the world’s poorest countries.

With the closure of land, sea and air borders now entering its second week, the Office of the UN High Commissioner for Refugees (UNHCR) expressed alarm at the worsening humanitarian situation.

“Over the past week, the closures have prevented humanitarian and commercial supplies and restricted the movement of aid workers. They are also placing new economic strain on a civilian population already suffering through many months of conflict,” said UNHCR spokesperson William Spindler at the regular press briefing in Geneva.

“As a result,” continued Mr. Spindler, “our staff and those of our partners are seeing an increase in the number of civilians seeking humanitarian help. Vulnerable populations including internally displaced people, refugees and asylum seekers are especially hard-hit.”

The spokesperson reminded reporters that since the conflict began in March 2015, it has become the world’s largest humanitarian crisis, affecting 21 million people.

“Two million internally displaced people, a million returnees and 280,000 refugees and asylum seekers are all struggling to survive through increasingly prolonged displacement,” he stressed, adding that worsening conditions have also led to child labour and early marriage.

“Together with other members of the humanitarian community in Yemen, UNHCR is advocating for the border closures to be lifted without delay. The closures are exacerbating the humanitarian crisis, posing a critical threat to the millions struggling to survive,” Mr. Spindler concluded. 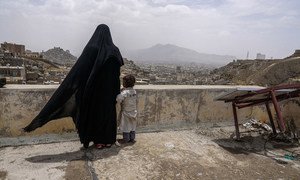 Yemen will be gripped by famine – one the likes of which the world has not seen in years – if the blockade on basic supplies into the country imposed by the Saudi Arabia-led coalition is not lifted immediately, the top United Nations humanitarian official has warned.