Addressing the ninth Association of South East Asian Nations (ASEAN)-United Nations Summit in Manila, the Philippines, Secretary-General António Guterres called for collective global and regional action to combat the challenges facing the world, in particular, those related to climate change.

“Globalisation is delivering new opportunities – but increasing economic and social inequalities, heightening citizens' anxieties and putting pressure on social cohesion; climate change is exacerbating severe weather events like hurricanes and storms,” said Mr. Guterres, adding: “The international community must raise the level of its response to all these complex threats; multilateralism and regional cooperation will be critical to a peaceful and prosperous future.”

In his remarks, the UN chief, also voiced deep concern over the displacement of hundreds of thousands of refugees from Myanmar to Bangladesh and said that it is a “worrying escalation in a protracted tragedy,” a potential source of instability in the region, as well as radicalization.

“Addressing the underlying issues by implementing the recommendations of the Advisory Commission on Rakhine will also be critical to reverse this tragedy,” he stressed, highlighting that sustainable and inclusive development is the best way to prevent both conflict and violent extremism.

“That is at the heart of the 2030 Agenda for Sustainable Development, our blueprint for a safe and prosperous future on a healthy planet, and central to the ASEAN Community Vision 2025,” he added.

Further in his remarks, the UN chief noted the region's economic growth has lifted millions out of extreme poverty, recalled its performance on the Millennium Development Goals (MDGs), and expressed hope that the region would continue to bring shared prosperity to millions more.

“Strengthened partnerships with regional organizations, including ASEAN, are a priority for me, and a critical pillar of my proposals to reform the UN,” he stated, adding that the UN stands ready to cooperate with the region to strengthen human rights.

Also today, Secretary-General Guterres held a meeting with Daw Aung San Suu Kyi, the State Counsellor of Myanmar, where they discussed, the situation in the country's Rakhine state.

According to a read out issued by Mr. Guterres' spokesperson, the UN chief “highlighted that strengthened efforts to ensure humanitarian access, safe, dignified, voluntary and sustained returns, as well as true reconciliation between communities, would be essential.”

The Secretary-General also stressed the importance of implementing the Rakhine Advisory Commission recommendations.

Mr. Guterres also met Monday with the Prime Ministers of the Lao People's Democratic Republic and Viet Nam, and with the President of Indonesia. 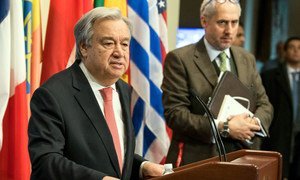