UN Photo/ICJ/Jeroen Bouman
A view of the Peace Palace, seat of the International Court of Justice (ICJ) in The Hague, Netherlands, 2005.
9 November 2017

The General Assembly and Security Council on Thursday elected four judges from an initial pool of six candidates to the International Court of Justice (ICJ), the principal judicial organ of the United Nations.

The General Assembly and Security Council on Thursday elected four judges from an initial pool of six candidates to the International Court of Justice (ICJ), the principal judicial organ of the United Nations.

After five rounds of simultaneous voting that ran into the early evening, the Assembly and the Council – which met independently of each other – re-elected three current judges, Ronny Abraham (France) and Abdulqawi Ahmed Yusuf (Somalia), and Antônio Augusto Cançado Trindade (Brazil), while also choosing one new justice, Nawaf Salam (Lebanon).

All four were elected in the fifth round of voting. They were elected to nine-year terms, starting on 6 February next year.

The Assembly and the Council will meet independently again Monday, 13 November, to elect a fifth judge to a seat on the ICJ.

The Court is composed of 15 judges, who are elected by an absolute majority in both the General Assembly (97 votes) and Security Council (8 votes). Five seats come up for election every three years. There is no bar on consecutive terms.

Judges are chosen on the basis of their qualifications, not their nationality, but no two judges can be from the same country. Effort is also taken to ensure that the principal legal systems of the world are reflected in the composition of the court.

There are three female judges – Xue Hanqin (China), Joan E. Donoghue (United States), Julia Sebutinde (Uganda) – out of a total of 15 seated on the Court.

Established in 1945, and based in The Hague in the Netherlands, the ICJ – informally known as the 'World Court' – settles legal disputes between States and gives advisory opinions on legal questions that have been referred to it by other authorized UN organs.

The election of the first members of the World Court took place on 6 February 1946, at the first session of the UN General Assembly and Security Council. 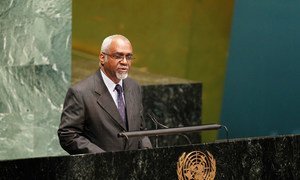 The United Nations General Assembly and Security Council today elected a fifth judge to a seat on the International Court of Justice (ICJ) – the principal judicial organ of the UN – following the election of four judges earlier this month.