Eunavfor
A Spanish aircraft on patrol as part of Operation ATALANTA.
7 November 2017

Condemning the acts of piracy and armed robbery at sea off the coast of Somalia, the United Nations Security Council today called for a comprehensive response to prevent and suppress such acts and tackle their underlying causes.

In a resolution adopted Tuesday, the 15-member Council also urged Somali authorities, to continue expedite the passing of comprehensive anti-piracy and maritime laws, to establish security forces with clear roles and jurisdictions to enforce these laws, as well as strengthen the capacity of its Somali courts to investigate and prosecute those responsible for piracy.

The Security Council also called upon UN Member States, “working in conjunction with relevant international organizations, to adopt legislation to facilitate prosecution of suspected pirates off the coast of Somalia.”

Also in the resolution, the Council urged all Member States to criminalize piracy under their domestic law and to favourably consider the prosecution of suspected – and imprisonment of those convicted – pirates apprehended off the coast of Somalia as well as their facilitators and financiers ashore, in line with applicable international law.

The UN body responsible for matters relating to international peace and security further encouraged flag States and port States to also consider the development of safety and security measures on board vessels, including, where applicable, developing regulations for the use of privately contracted armed security personnel on board ships, aimed at preventing and suppressing piracy off the coast of Somalia, through a consultative process, including through the relevant UN entities.

The Council also commended the efforts of the European Union Naval Forces (EUNAVFOR) Operation ATALANTA, Combined Maritime Forces’ Combined Task Force 151, counter-piracy efforts of the African Union and the naval activities of the Southern Africa Development Community, as well as the efforts of other States to suppress piracy and to protect ships transiting through the waters off the coast of Somalia. 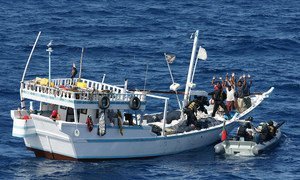 Noting that recent attacks on commercial ships off the coast of Somalia highlight the continued threat of piracy, the United Nations Office on Drugs and Crime (UNODC) has urged ships to follow advice of navies and that of the International Maritime Organization while planning passage through the region.