UN Photo/Rick Bajornas
Men unload supplies from a pick-up truck in Salybia, one of the areas hit hard by Hurricane Maria in Dominica.
7 November 2017

Seven weeks since hurricane Maria made landfall in Dominica and left widespread destruction in its wake, the United Nations migration agency has been supporting local tradespeople with safe construction skills to repair the damage and create conditions for a full recovery.

One of the first beneficiaries to have her house repaired by local construction workers trained by the UN International Organization for Migration (IOM) is 31-year-old Tessa Williams, a mother of three, whose eldest child is in a wheelchair and youngest still an infant.

“With this house, we have ensured that Tessa and her children have a safe home,” said Jan-Willem Wegdam, IOM's team leader in Dominica.

“The community sees there is actually something happening and we have completed the training of our carpenters on safe construction skills,” he added.

Tessa was chosen by her own community to be one of the first recipients of the IOM support.

According to the UN agency, 20 teams of trained local workforce are repairing the roofs of some 400 vulnerable households which were moderately to heavily damaged in the storm. They are deployed in Wesley, Calibishi and Woodford Hill, three of the hardest-hit communities on the Caribbean island.

Furthermore, with funding from the UN Central Emergency Response Fund and the Government of the United Kingdom, IOM procured building materials in the Dominican Republic in record time and brought it to Dominica with the help of the Dutch Navy.

Rebuilding houses is also helping address some of the tensions in the community resulting from prolonged stay in makeshift dwellings or living in close coexistence with relatives or friends.

The work is also having another impact: it is keeping many people from migrating to neighbouring countries in search of better opportunities after losing their homes and means of livelihood in the aftermath of the hurricane.

“Housing projects are a great way to keep locals from leaving the island, but we need stronger funding to create as many employment opportunities as possible and to rebuild the lost dwellings,” said Mr. Wegdam, adding, “It's not only about having a roof over their heads but about creating the conditions for a full recovery after a huge disaster.”

Dominica was hit on 18 September by the Category Five Hurricane Maria that devastated the island with winds of nearly 250 km per hour. It has been estimated that 23 per cent of buildings were destroyed, 39 per cent of the houses sustained severe damage, and further 28 per cent were affected to some degree.

However, sustained support is needed in the island as almost 2,000 persons – including the elderly, single-female heads of households and persons with chronic diseases – are still living in shelters due to destruction or severe damage to their homes. 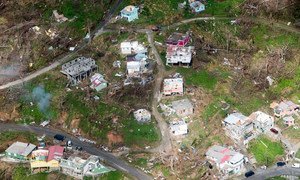