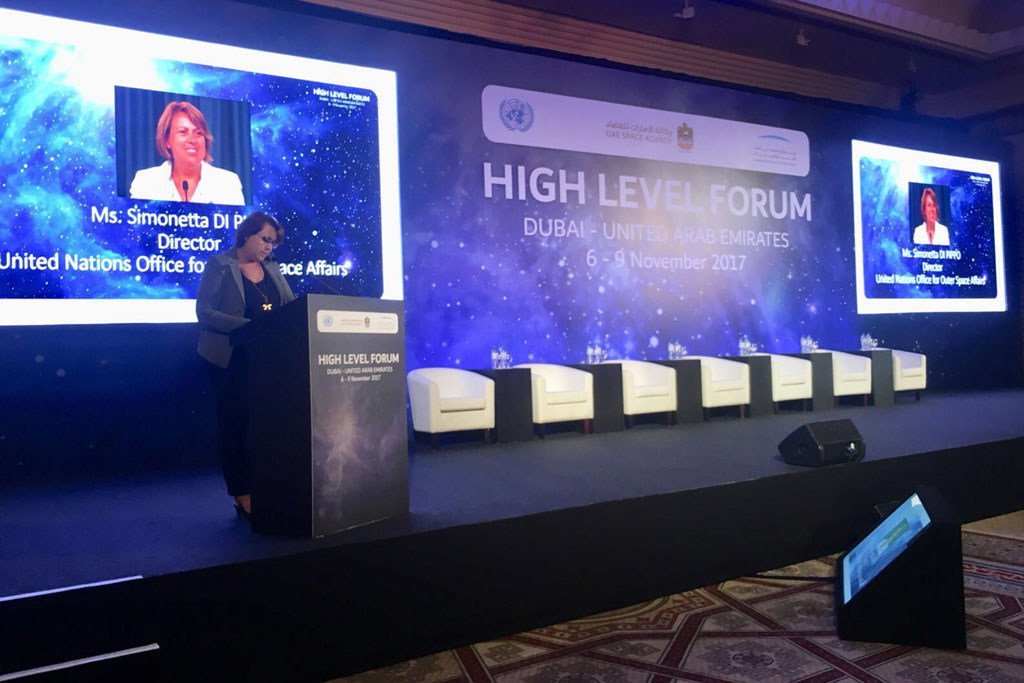 UN News/Runa A.
Simonetta Di Pippo, Director of the UN Office for Outer Space Affairs (UNOOSA) addresses the opening ceremony of the High Level Forum on Space as a Driver for Socio-economic Development in Dubai, United Arab Emirates.
6 November 2017
SDGs

A United Nations meeting opened in Dubai on Monday aiming to examine how the global space community can contribute to international efforts to bring about a more just and equitable world for all people and the planet.

A United Nations meeting opened in Dubai on Monday aiming to examine how the global space community can contribute to international efforts to bring about a more just and equitable world for all people and the planet.

The High-Level Forum on Space as a Driver for Socio-Economic Sustainable Development is the second such event organized by the UN Office for Outer Space Affairs (UNOOSA) and the United Arab Emirates Space Agency, and hosted by the Mohammed Bin Rashid Space Centre.

In her opening address, UNOOSA Director Simonetta Di Pippo underscored the role the space sector can play in combating some of the world's greatest challenges such as climate change, pollution and deforestation.

“To understand what is happening to our Earth and to be able to elaborate efficient counter-measures, we need to monitor developments and facilitate access to reliable data,” she said.

“Space infrastructure offers us this unique tool and is crucial for this purpose. International cooperation and long-term planning is essential in this regard and a global understanding of space technology is therefore imperative,” she added.

At the High-Level Forum, officials from national space agencies, astronauts, diplomats, academics, as well as representatives from the private sector and other entities, as well as UN agencies, will explore how they can help in achieving the Sustainable Development Goals (SDGs).

The 17 SDGs, agreed by world leaders two years ago, address global concerns such as eradicating extreme hunger, promoting good health and wellbeing, and helping vulnerable regions adapt to climate change. They are interconnected and have a deadline of 2030.

Space-based technologies and the Global Goals

UNOOSA believes space-based technologies, applications and services have an impact on almost all aspects of development.

For example, remote sensing satellites supply data that is used to monitor soil, snow cover, drought and crop development, which is critical for agricultural production and, ultimately, food security. The information they provide is also used to analyze infectious disease patterns and determine which areas may be at risk. They also measure and monitor existing land use patterns, thus helping governments to plan for future urban development that is socially and environmentally sustainable.

Discussions in Dubai will centre on what UNOOSA has called the 'four pillars' surrounding space, namely: the economic and societal benefits that can be derived from space activities, the accessibility of space technology and applications to all communities, and the need to strengthen international cooperation in space activities, also known as space diplomacy.

The Director General of the United Arab Emirates Space Agency, Mohammed Al-Ahbabi, reported on how his country is helping others in the region to join the growing number of nations in the global space family.

“Earlier this year, the United Arab Emirates, with support from His Highness Sheikh Mohammed Bin Rashid, managed to organize the first Arab space meeting,” he told the gathering.

“We managed to help Bahrain and we worked closely with our friends in Egypt, Algeria and Saudi Arabia. We do believe that the more countries in our region involved in space activities is to the [betterment] of our people,” he addee.

Ms. Di Pippo, the UNOOSA Director, also used her speech to stress the need to bridge “the so-called space divide” between countries that have developed space technologies and those which do not have access to them.

As space technologies such as satellite-based telecommunication and global navigation satellite systems, also contribute to disaster prevention and response, her agency helps developing countries to access data via the UN Platform for Space-based Information for Disaster Management and Emergency Response (UN-SPIDER).

“One of the great things I admire most about space exploration and the human endeavors in outer space is the common desire for a better world,” she said.

“Space unites all humans for a shared and higher purpose; it excites, motivates and inspires us in so many ways. We are constantly inventing new tools and capabilities; technology advances and innovations that will take humanity beyond any place we have already been.”

The High-Level Forum runs through Thursday and is the second of three annual meetings leading up to the June 2018 commemoration of the 50th anniversary of the first UN Conference on the Exploration and Peaceful Uses of Outer Space.

That event, known as UNISPACE+50, will set the future course of global space cooperation.

♦ Receive daily updates directly in your inbox - Subscribe here to a topic.
♦ Download the UN News app for your iOS or Android devices.
outer space

A three-day event on how to, among other things, improve women’s involvement in the aerospace sector as well as in the fields of science, technology and mathematics, kicked off today under the leadership of two United Nations offices.