The Bonn Conference of the State Parties to the UN Framework Convention on Climate Change (UNTCC), informally known as COP 23 and which runs until 17 November, is chaired by Fiji, an island State particularly affected by the impacts of our warming climate.

“The need for urgency is obvious. Our world is in distress from the extreme weather events caused by climate change – destructive hurricanes, fires, floods, droughts, melting ice, and changes to agriculture that threaten our food security”, said COP 23 President and Prime Minister of Fiji Frank Bainimarama, at the opening of the conference.

“Our job as leaders is to respond to that suffering with all means available to us. [We] must not fail our people. That means using the next two weeks and the year ahead to do everything we can to make the Paris Agreement work and to advance ambition and support for climate action before 2020.”

The Paris Agreement, which was adopted by the 196 Parties to the UNFCCC in December 2015 in the French capital after which it is named, calls on countries to combat climate change by limiting the rise of global temperature below 2 degrees Celsius and strive not to exceed 1.5 degrees Celsius.

A year ago, the Marrakech Climate Conference concluded with the Marrakech Action Proclamation, for our climate and sustainable development, in which the UNFCCC States Parties affirmed their “commitment” to the “full implementation” of the Paris Agreement. Today, 169 Parties have ratified the Agreement.

UN weather agency warns 2017 to be among hottest years ever

As this year’s Conference got under way, the UN World Meteorological Organization (WMO), released its provisional statement on the State of the Climate. “It is very likely that 2017 will be one of the three hottest years on record, with many high-impact events including catastrophic hurricanes and floods, debilitating heatwaves and drought,” said the agency.

For his part, WMO Secretary-General Petteri Taalas told delegates in Bonn that the past three years have all been in the top three years in terms of temperature records. “This is part of a long term warming trend,” pointing to recent “extraordinary weather,” including temperatures topping 50 degrees Celsius in Asia, record-breaking hurricanes in rapid succession in the Caribbean and Atlantic reaching as far as Ireland, devastating monsoon flooding affecting many millions of people and a relentless drought in East Africa.

“Wherever we live, we are all vulnerable and need to act,” Mr. Bainimarama told delegates, explaining that Fiji is helping build a Grand Coalition for decisive, coordinated action by governments at every level, by civil society, the private sector and all citizens on earth.

“That’s why we installed an ocean-going Fijian ‘drua’ canoe in the entrance here to remind everyone of the need to fill its sail with collective determination to make COP23 a success and confront the biggest challenge humanity has faced,” he said.

Patricia Espinosa, UNFCCC Executive Secretary, reminded the participants that: “We have some very specific goals we must achieve while we are here in Bonn. We expect these negotiations to be the next essential step that ensures that the Paris Agreement’s structure is completed, its impacts are strengthened, and its goals achieved. We also need to move forward to fulfil the commitments that are due in 2020. In this regard, finance and mitigation pledges are essential.”

The Bonn Conference will feature a series of meetings and events, including the high-level segment, on 15 November and 16 November, attended by Heads of State and Government, Ministers, and UN Secretary-General António Guterres.

Among the side events scheduled at COP 23, several will be organized under the Marrakech Partnership for Global Climate Action, to show how cities, regions, private sector companies and investors are trying to implement the Paris Agreement in the areas of energy, water, agriculture, oceans and coastal areas, human settlements, transportation, industry, and forests. 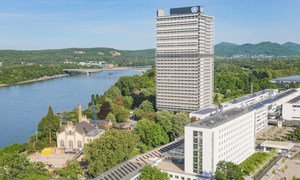 One year after the entry into force of the Paris Agreement on climate change, the Bonn Conference, which opens on 6 November in Germany, will be an opportunity for nations around the world to show their ambition for climate action and their determination to keep their promises.