OCHA/Philippe Kropf
The city of Sa’ada in the Sa’ada Governorate has been heavily hit by airstrikes during the conflict in Yemen (file).
6 November 2017

Expressing horror at continued violence perpetrated by all parties to the conflict in Yemen, the top United Nations humanitarian official in the country has called on the conflicting sides to uphold their obligations under international humanitarian law.

“In particular, I ask [the parties] to adhere to the principles of distinction between civilians and combatants and proportionality in the conduct of hostilities and refrain from directing attacks against civilians and civilian infrastructure,” said Jamie McGoldrick, the UN Humanitarian Coordinator for Yemen, in a statement Sunday.

“I also reiterate my calls on States who have influence over the parties to step up their engagement to bring about a political solution to the crisis,” he added.

Last week alone, at least thirteen children were among those killed in the war-torn country, including six among 31 people who were killed in an air strike that struck a busy night market in Sahar district in Sa'ada governorate. At least 26 other people were injured.

On 2 November, shelling in a residential area in Al Onsowa neighbourhood in Taizz city killed five children and injured two others. All the children killed or injured were between seven and 15 years old.

There are also reports that on 3 November house in Baqim district in Sa'ada governorate was hit in an air strike, killing a whole family of seven people, including two children and two women.

“These latest events are unfortunately part of the tragic pattern of the disregard that the parties to the conflict continue to show for the laws of war and their obligations and responsibilities to protect civilians' lives,” noted Mr. McGoldrick.

“All parties to this brutal conflict must act in the interest of the people of Yemen and in line with international humanitarian law,” he underscored.

The conflict in the country, now into its third year, has killed thousands and driven millions from their homes. Hostilities have also left over 17 million Yemenis food insecure, over a third of the country's district in severe danger of famine, destroyed infrastructure and resulted in the breakdown of public services, especially water and sanitation systems.

Lack of water and sanitation systems has also resulted in a devastating cholera outbreak, which has already killed more than 2,100 individuals and continues to infect thousands each week.

“We must all do whatever we can to bring the horrendous suffering of the people of Yemen to an end as soon as possible,” said Mr. McGoldrick. 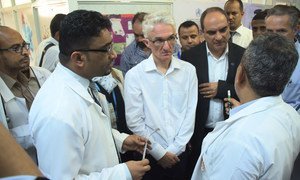 Already struggling to cope with a dire humanitarian crisis, war-torn Yemen is now facing the fastest-growing cholera epidemic ever recorded, with some 895,000 suspected cases as of 1 November, the United Nations relief wing reported Thursday.