Discrimination, exclusion and persecution are stark realities for many of the world’s stateless minorities, the United Nations refugee agency warned in a new report, calling for immediate action to secure equal nationality rights for all.

“Stateless people are just seeking the same basic rights that all citizens enjoy. But stateless minorities, like the Rohingya, often suffer from entrenched discrimination and a systematic denial of their rights,” UN High Commissioner for Refugees Filippo Grandi said Friday on the launch of the report, This Is Our Home: Stateless minorities and their search for citizenship.

The report notes that more than 75 per cent of the world’s known stateless populations belong to minority groups. Left unaddressed, their protracted marginalization can build resentment, increase fear and, in the most extreme cases, lead to instability, insecurity and displacement.

A press release said that although the report is based on research prior to late August when hundreds of thousands of Rohingya – the world’s biggest stateless minority – began fleeing Myanmar to Bangladesh, their situation is nonetheless illustrative of the problems that years of discrimination, protracted exclusion and their impact on citizenship status can lead to.

“In recent years, important steps have been taken to address statelessness worldwide. However new challenges, like growing forced displacement and arbitrary deprivation of nationality, threaten this progress. States must act now and they must act decisively to end statelessness,” Mr. Grandi stressed.

The report shows that, for many minority groups, the cause of statelessness is difference itself: their histories, their looks, their language, their faith. At the same time, statelessness often exacerbates the exclusion that minority groups face, profoundly affecting all aspects of their life – from freedom of movement to development opportunities, and from access to services to the right to vote.

The report is based on consultations conducted in May and June 2017 with members of stateless, formerly stateless or at risk minority groups in Madagascar, The former Yugoslav Republic of Macedonia and Kenya, which were selected as examples to highlight the issues faced by stateless minorities worldwide.

The report is released on the third anniversary of UNHCR’s #Ibelong Campaign, which urges all States to implement measures, such as facilitating the naturalization or confirmation of nationality for stateless minority groups, allowing children to gain the nationality of the country in which they were born; and ensure universal birth registration. 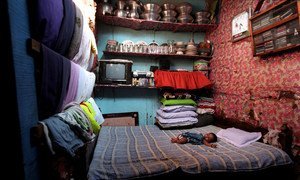 Stateless children across the world share the same feelings of discrimination, frustration and despair, according to a new United Nations report published today, that warns that urgent action is needed before statelessness “sets in stone” problems haunting their childhood.