OCHA/Themba Linden
Pictured here the destruction in 17 Tammuz district, western Mosul, Iraq, one of the most important districts in Mosul.
2 November 2017

The Islamic State of Iraq and the Levant (ISIL/Da’esh) perpetrated serious and systematic violations in Iraq that amount to “international crimes” during the nine-month battle for Mosul between the terrorist group and Iraqi Government forces, a United Nations report has concluded.

“Those responsible must answer for their heinous crimes,” said UN High Commissioner for Human Rights Zeid Ra'ad Al Hussein, citing the execution-style killing of civilians, the suffering inflicted on families, and the wanton destruction of property, largely during the period from November 2016 to July 2017.

The report, issued on Thursday by the UN Assistance Mission for Iraq (UNAMI) and the Office of the UN High Commissioner for Human Rights (OHCHR), documents mass abductions of civilians, the use of thousands as human shields, the intentional shelling of civilian residences, and indiscriminate targeting of civilians trying to flee the city.

In July 2017, Iraqi Security Forces (ISF) and affiliated armed groups retook the city which had fallen under the control of ISIL in June 2014.

The report finds at least 2,521 civilians were killed during the nine-month military operation, mostly as a result of ISIL attacks, including 741 people who were executed. The report notes that since 2014, at least 74 mass graves had been discovered in areas previously held by ISIL in Iraq. Additionally, as of 26 October 2017, the Civil Defence Corps reported that they had recovered the remains of 1,642 civilians from underneath rubble in Mosul.

The report recounts that early in November 2016, in areas of Mosul under ISIL control, members of the group used loud speakers to announce that residents of areas retaken by the ISF were considered as “legitimate targets” because of their ‘failure’ to fight against Government forces.

The UN Secretary-General’s Special Representative for Iraq, Ján Kubiš, said evidence shows that ISIL committed mass atrocities against civilians and Mosul itself, a city they claimed as their capital, but for which, in reality, they sought its ultimate and deliberate destruction.

“Da’esh’s reign of terror has spared no one, inflicting untold suffering on unarmed residents whose only guilt is that they lived in the areas under ISIL’s control,” he said.

“Their evil acts did not stop at killing and terrorizing residents, as they wantonly destroyed cultural and religious monuments, including the city’s iconic leaning minaret Al-Hadba, in total disregard of history and Islam, the religion this terrorist organization falsely claimed to represent,” Mr. Kubiš added.

The report calls on the international community, including the UN Security Council and the Human Rights Council, to take action to ensure that those responsible for international crimes such as genocide, crimes against humanity and war crimes are held accountable.

The report also urges Iraqi authorities to investigate alleged violations and human rights abuses by ISF and associated forces during the military operation. It recorded 461 civilian deaths as a result of airstrikes during the most intensive phase of the ISF-led offensive from 19 February. 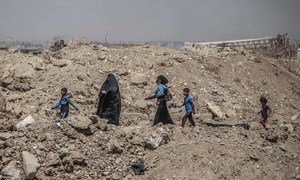 One year since the start of the military campaign to retake Mosul from the Islamic State of Iraq and the Levant (ISIL/Da'esh) terrorist group, the United Nations Humanitarian Coordinator said hundreds of thousands of people are vulnerable and still need assistance.