FEATURE: As Afghan war grinds on, a marginalized young generation raises its voice

Fraidoon Poya
Provincial Councilwoman Somaia Ramish (second right) on the set with host and guests after talking about peace and the role of young Afghans at Asia Television.
31 October 2017
Peace and Security

Confronting the horrors of a war they hope to end one day, young Afghans are making themselves heard through traditional media and on the Internet. These Afghans, many educated and non-traditional, are countering messages from militant groups which seek to play upon ethnic and religious differences to encourage violence.

It is “show time” on Asia Television in Western Afghanistan, as talk show guest Somaia Ramish replies to a pointed question about war and peace.

“Fortunately, women haven’t had a major role in the conflict or the destruction of Afghanistan, which strengthens our voices at the peace table,” said the provincial councilwoman, 30, adding: “Unfortunately, these days, violent extremism has a bigger advertising budget than does the promotion of peace.”

Confronting the horrors of a war they hope to end one day, young Afghans are making themselves heard through traditional media and on the Internet. These Afghans, many educated and non-traditional, are countering messages from militant groups which seek to play upon ethnic and religious differences to encourage violence.

The young Afghan voices belong to students, young politicians, and also journalists. In the case of Asia Television, support from the United Nations Assistance Mission in Afghanistan (UNAMA) helps sustain a regular peace dialogue, which runs alongside a slate of soap operas and other entertainment shows. The support is part of a nationwide UN effort to invest in peace, and the show’s producers say it sends a strong message and helps drive grassroots conflict resolution.

Young Afghans remain highly susceptible to war propaganda, which comes in the form of street whispers and threats over social media. At the same time, it is a challenge for the central Government to win the respect of young Afghans, especially in distant provinces.

“Without security, we can’t have peace,” says Arash Majedi, 23, who serves lamb and chicken kabobs in a strobe-lit shisha café, which plays a steady beat of Iranian rap music. “It is the responsibility of the Government to stop someone from blowing us up.” 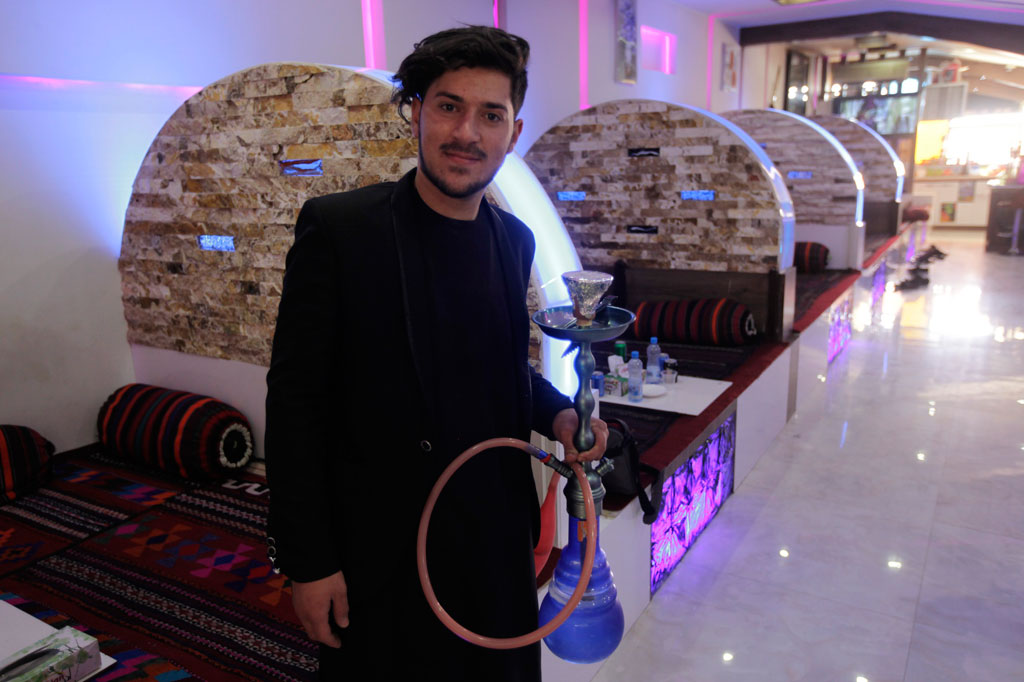 Set on the western edge of Afghanistan, surrounded by pockets of war and bordering Iran, Herat is a 5,000-year-old centre of Asian culture caught between a tide of extremism and popular, albeit ancient, traditions of cultivating flower gardens and reciting poetry with friends and relatives.

“Insurgents are active in almost all the districts around us,” said Said Sayedi, 28, who heads a conflict resolution centre in Herat, which has struggled for funding in recent years. “In some cases, foreign powers are trying to dominate more moderate insurgent groups to keep other militants in check.”

“We try to encourage independent thinking and help the young choose non-violence,” he said. “This needs to be elaborated in order that they can break free.” Sayedi concedes that there are many “no-go zones” around Herat where conflict resolution experts cannot enter. “We would need an escort to go south to Shindand district. There are lots of kids – 15 and 16 years old – who are being recruited there by rival factions.”

Unfortunately, these days, violent extremism has a bigger advertising budget than does the promotion of peace.

UN officials said local peace initiatives remain in dire need of more outside help to sustain their work. “Afghan youth are actually reaching out to the UN and conveying to us their wish that the UN [and others] can play a new role in regional peace negotiations,” said Najibullah Rezaee, a UN political affairs officer.

Even as the battle for the hearts of young Afghans intensifies, new voices are speaking up. “Despite the challenges and marginalization young Afghans face, they still are carrying out a new and dynamic role in support of peace,” said Fraidoon Poya, a public affairs officer with UNAMA in Herat.

Behind the iron gates of Herat University, built to a modern and spacious design after the fall of the Taliban in 2001, Arman Qaderi, 23, a senior in the law faculty, organizes classes and edits texts on peace. His Peace Club has produced, with the help of Professor Nasir Rahimi, a systematic approach to changing minds and behaviour.

“The most important thing we can do is help to motivate people who already feel the urge for peace,” said Qaderi. A colleague Fardina Salehi, 28, works as a financial secretary and also as an instructor in peacemaking. “Here in Afghanistan, we experience more war than we do peace,” said Salehi. “I’ve learned that peace starts in the family and moves to society. Our approach is totally different than any of the other classes taught here at Herat University. We approach learning through discussion, participation and brainstorming.” 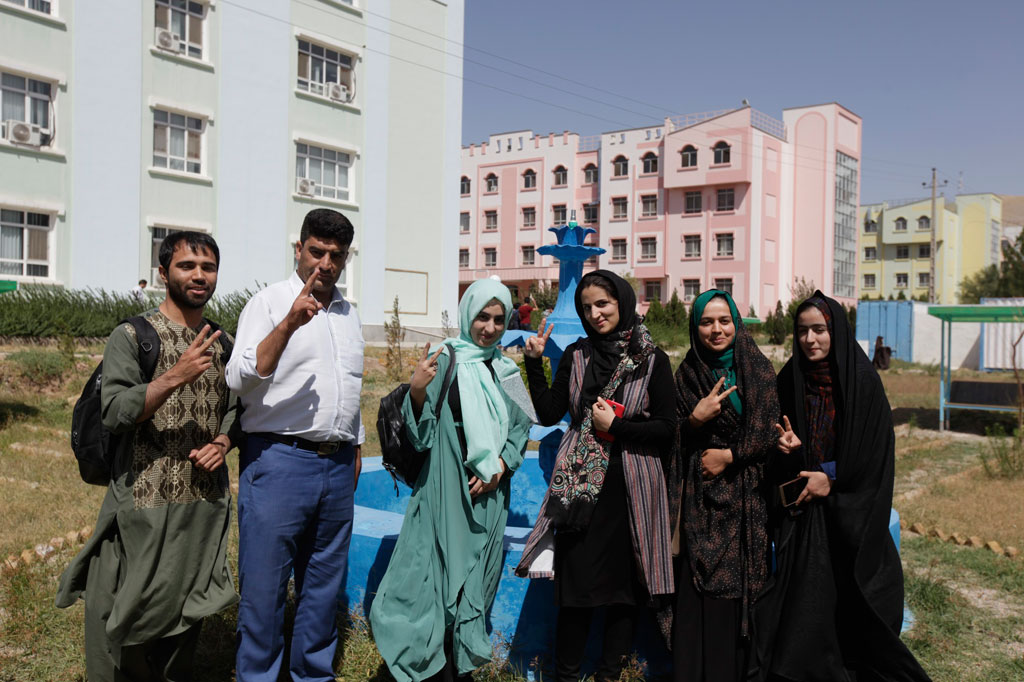 “Due to ongoing conflict, we are all in violence with each other – even within our own families,” said Salehi. “When I watch violence on TV, my mind is further disturbed. We all have to seek ways to calm our minds.”

Professor Rahimi said he has seen a change sweeping across the campus in Herat. In a walk with students down to a newly-inaugurated Park for Peace, he reflects on some changes he’s seen in recent years. He says peace is not an easy path, but one with a growing following.

Recently, 20 students from the Sharia Law faculty took a two-week journey to India to walk in the footsteps of Mahatma Gandhi, who spearheaded India’s independence movement based on non-violent resistance. The tour included visits to Gandhi’s home and to his ashram. When violence engulfed Herat on a recent week, these same students helped to organize a city-wide blood drive to support victims of sectarian violence.

“When we began our peace initiative, a lot of students doubted the approach: They said, ‘You can’t possibly bring peace after so much failure and war,’” said Professor Rahimi. “Students openly wonder – after decades of war – how talking about peace is going to make a difference. After they overcome initial doubts, however, they come to me and ask how they can move towards a deeper understanding of peace.”

UNAMA has a mandate to support the Government of Afghanistan and its citizens in a shared goal of becoming a stable, open, and peaceful nation. This feature piece is meant to tell a human interest story related to how Afghanistan and the UN are working together to overcome the many challenges to achieving this goal.

As she begins to read her poem, Fatema’s voice is faint and unsure of itself. She has been writing poetry only for the last six months because, as she explains, she wants to get in touch with her inner feelings. What emerges in her recitation has echoes of Afghanistan’s ancient past, and signs of a new and modern passion. What is heard, translated from Dari, is a short narrative about the horrors of war – “The color of blood and cold corpses … fresh bodies thrown into battle” – and Fatema’s own story, one that ends with the hope that, “somewhere between the lines, set in the sweetness, is a space without war.”