UNICEFCAR/Donaig Le Du
These two boys were among 357 child soldiers released by anti-Balaka militias and the ex-Séléka armed group in the Central African Republic (CAR) on 14 May 2015.
31 October 2017

Deeply concerned about the abuse of children in war zones, the United Security Council today – in a debate in New York which included Secretary-General António Guterres and his special envoy on the issue – urged countries and non-State actors to allow children access to education and healthcare during and post-conflicts.

The Council said that it is “gravely concerned by the scale and severity” of human rights abuses and violations of international humanitarian law committed against children in some countries, including terrorism, mass abductions, and sexual slavery, which can cause displacement and affect access to education and healthcare services.

Through a statement agreed by all 15 of its members, the Council also noted that children's international human rights continue to be violated “with impunity” in some countries, and stressed that the best interests of children, as well as their needs and vulnerabilities, be considered when making any decisions related to children in war zones.

Welcoming the Secretary-General's “enhanced engagement” with parties on the issue, the Council reiterated that protection of children should be an important aspect of a comprehensive strategy to resolve conflict and sustain peace.

Addressing the Council's day-long debate, the Mr. Guterres said children around the world are suffering “enormously and unacceptably,” resulting in “global shame.”

“If we leave the next generation traumatized, seething with grievances, we betray those we serve and we betray ourselves,” he said in the open debate of the Council.

He pointed to his latest report on the issue, which included a record high number of child casualties in Afghanistan, a doubling of verified cases of recruitment and use of children in Syria and Somalia, and widespread sexual violence against children in the Democratic Republic of the Congo, Nigeria, South Sudan and other countries.

If we leave the next generation traumatized, seething with grievances, we betray those we serve and we betray ourselves. Secretary-General António Guterres

However, the report, which was presented to the Council earlier this month, also notes “better” protections, including the release of children held in Somali prisons, and “substantive” measures taken by the coalition in Yemen led by Saudi Arabia.

“We need to strengthen our engagement with regional and sub-regional actors,” Mr. Guterres said, stressing the need for additional legal and political commitments to protect children, and urging Member States to provide resources to support these initiatives.

He also appealed to all parties to the conflicts to work with the UN, to ensure protection for “the most precious resource of your countries: your children.”

Among the dozens of other speakers who addressed the Council today was the Secretary-General's Special Representative for Children and Armed Conflict, Virginia Gamba.

She said children are used “as fuel of war,” and called for international action to address the use of children “as expendable commodities by warring parties.”

Echoing the Secretary-General's call for resources, the Special Representative appealed for adequate funds to implement and sustain reintegration, reinsertion and reskilling programmes to support children conscripted into armies. She also reiterated that such children, including girls, are primarily victims.

Violations of child protection provisions must be investigated and violators held to account, she said: “Accountability must be prioritized to break cycles of violence aid prevention efforts.” 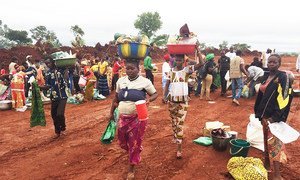