While Uruguay’s commitment to human rights at home and abroad is clear, a series of challenges must be addressed, including “inhumane” prison conditions and widespread violence against women, the UN human rights chief said Friday.

“The Uruguayan authorities have made significant efforts to integrate human rights into public policy, and there is clear political will to make progress in this area,” said UN High Commissioner for Human Rights Zeid Ra'ad Al Hussein after a two-day visit to the country.

Noting that Uruguay’s efforts to improve its overall situation are recognised domestically and internationally, Mr. Zeid also highlighted that the country had adopted laws to tackle discrimination, reduce poverty and enhance the rights of women and lesbian, gay, bisexual, transgender and intersex (LGBTI) persons.

“Uruguay is a country with tremendous potential, which has dared to make a difference in many areas,” he continued. “However, the progress made to date is not enough: the country can do more to tackle the serious human rights violations that continue to occur.”

According to Mr. Zeid, Uruguay must address its challenges with human rights-based strategies, in which “the Government, Congress and, very importantly, the judiciary, uphold and implement the country’s obligations under international human rights law.”

During his meetings with Uruguayan authorities and civil society representatives, the High Commissioner expressed concern about serious human rights issues in the country, such as the reportedly “appalling and inhumane” conditions of many detention centres.

Mr. Zeid also voiced alarm at the situation of adolescents in conflict with the law, particularly the excessive duration of pre-trial detention and called on Uruguay to ensure their protection from violence and discrimination.

“In a country aging as rapidly as Uruguay, the whole of society needs to realise that youth is their hope for the future,” he said.

Mr. Zeid also called on the Government to make every effort to ensure that all allegations of torture or ill-treatment are investigated properly, emphasizing “Uruguay needs to use imprisonment as a last resort, implement more non-custodial sentences and introduce more rehabilitation programmes.”

Mr. Zeid called “troubling,” the persistently high rates of gender-based killings of women, along with the difficulty many women victims of violence face in accessing justice. He also urged the Government to remove any restrictions and barriers to reproductive health services, including safe abortion procedures, which were decriminalised in 2012, and post-abortion care.

While acknowledging the Government’s attempts to address impunity during the military dictatorship of 1973 to 1985, Mr. Zeid said “it is 32 years since the dictatorship ended, but Uruguay has yet to deal adequately with a brutal period in its recent history. This is essential for society to look to the future without fear and for this, international human rights law is key.”

“I am convinced that the country is capable of overcoming its most pressing human rights challenges for the benefit of its people,” he stressed, adding that his Office stands ready to continue providing support in this endeavour. 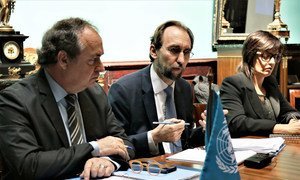 The United Nations human rights office and its counterpart in the Americas have launched a new and deeper cooperation plan to address one of the most pressing problems in that region – the protection of human rights defenders.