At the Security Council today, a senior United Nations official called on Member States, regional organizations and civil society for greater partnership to boost women’s participation at all levels and help ensure UN peace efforts are stronger and more sustainable.

“We will ensure our prevention initiatives and monitoring include a focus on women’s rights violations [and] we will tackle the structural and root causes of crisis, including gender inequality,” Maria Luiza Ribeiro Viotti, the Chef de Cabinet, speaking on behalf of the Secretary-General, told a day-long debate in the Security Council, underlining the need for more action on the ‘women, peace and security agenda’ – with prevention as a core pillar.

Noting the importance of gender equality and security of women as reliable indicators for peace, she added: “We will [also] strengthen the collection and analysis of gender statistics and encourage Member States to monitor gender equality indicators as part of their work to implement the Sustainable Development Goals (SDGs).”

In her briefing, the Chef de Cabinet spoke of the need to ensure adequate representation of women in the security sector both to reduce their exposure to harm as well as to realize their potential in conflict prevention.

Noting, further, that only three per cent of peacekeepers are women, she informed the 15-member Council of the Secretary-General’s efforts with troop- and police-contributing countries to increase the number of female uniformed personnel.

Ms. Viotti also noted that 17 years after its adoption, Security Council resolution 1325 on women and peace and security was too often being implemented in an ad hoc fashion, and called on UN Member States to share evidence and examples in order to examine gaps and successes.

Also briefing today, Phumzile Mlambo-Ngcuka, the Executive Director of the UN Entity for Gender Equality and the Empowerment of Women (UN Women) said said that while atrocities against women and girls in armed conflict are now the focus of attention and documentation, it is critical that perpetrators are brought to justice, and that survivors are accorded dignity and support.

“This impunity cannot be allowed to continue,” she underlined.

Further, informing the Security Council of an overall decline in women’s participation in UN-led peace processes, inclusion of gender-sensitive provisions in peace agreements and consultation with women’s civil society organizations, in comparison with one year ago, Ms. Mlambo-Ngcuka said that the political marginalization was not only limited to peace talks.

Only 17 countries have an elected woman Head of State or Government and the proportion of women parliamentarians in conflict and post-conflict countries has stagnated at 16 per cent in the last two years.

“The use of quotas and temporary special measures would help,” she said, noting examples from Somalia and Mali, and called on donors to continue supporting efforts targeted at women’s empowerment and highlighted the importance of ensuring gender-conscious funding for policies and programmes.

Concluding her remarks, the head of UN-Women stressed that women, peace and security agenda is now an essential pillar of global affairs.

“This is only the beginning. The chorus of voices that are appalled by the persistent political marginalization of women in decision-making is speaking louder […] this agenda unites us because people from all over the world, every day, look up to the United Nations for peace, equality and inclusion,” she said.

Also speaking today were Charo Mina-Rojas of the NGO Working Group on Women, Peace and Security, and Michaelle Jean, Secretary-General of the Organisation internationale de la Francophonie, who underscored the need to effectively combat sexual and gender-based violence and end impunity.

“The silence around these crimes is as appalling as the crimes themselves,” stressed Ms. Mina-Rojas.

They also called for greater participation of women’s organizations and community leaders in the design and implementation of security and peacebuilding efforts.

“More than lip service should be paid to ensuring that women were invited to participate in national dialogues,” said Ms. Jean. 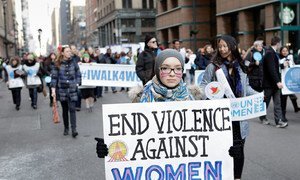 The European Union and the United Nations today launched a joint initiative to eliminate all forms of violence against women and girls, one of the most widespread and devastating human rights violations across the globe.