A United Nations envoy has met with senior Yemeni and Saudi officials to discuss his initiatives to end fighting in Yemen, stressing that “this is at heart a political conflict so it can only be solved with political negotiations.”

In 2015, Yemen plunged into civil war between Houthi rebels and supporters of Yemen’s internationally recognized Government.

“We are currently exploring significant steps that each side can take to restore confidence and move towards a viable negotiated settlement,” said Mr. Ould Cheikh Ahmed at the end of the visit during which he met with Yemeni President Abd-Rabbu Mansour Hadi and Foreign Minister Abdel-Malek Al-Mikhlafi.

The UN envoy added that these steps include a renewed ceasefire, confidence-building measures to alleviate the humanitarian suffering and the return to the negotiation table towards a comprehensive peace agreement.

“This large-scale suffering must end. I appeal to the parties to make the necessary concessions that can help paving the way for a long-lasting peace, and to the international community to ensure unity of purpose in supporting these much-needed initiatives,” Mr. Ould Cheikh Ahmed said. 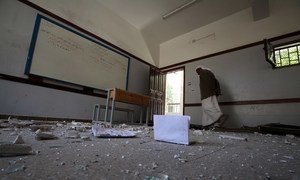